As previously mentioned, I was in Las Vegas a couple weeks ago for a wedding, and I managed to take time to visit two chocolate places while I was there. You can click here to read my review of Jean Philippe Patisserie in the Bellagio. Now let's move across the street to Paris, which is home to Hexx Chocolate. 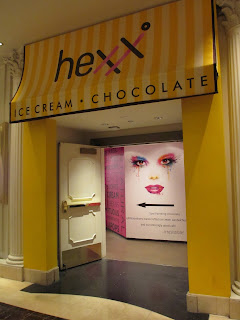 Hexx has both their chocolate shop and a restaurant; I only went to the shop. What's nice is that you don't have to walk through the casino to get into either of the two entrances: one is outside by the street/sidewalk and the other is just inside one of Paris's entrances, in a little hallway before you get to the casino area. 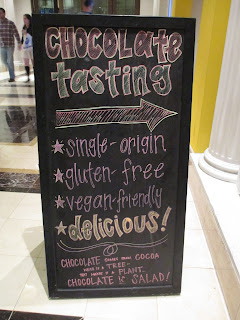 I have a picture of the latter entrance, which shows Hexx's logo character. Their website explains that her name is Alexxa; she is "a mystical muse," "spreading magic by leaving a spell of good fortune for each guest." Oh-kay. Her eyes (minus the nose and mouth) also adorn the white bags that Hexx bags up their products in. And at the bottom of the bag, there is a quote about gifts and fortune and whatnot. There has to be something a little strange to Hexx: it is Vegas.

Their shop sells candy and novelty gifts, along with ice cream and such. I hardly looked at all of this and honestly, as much as I love candy and candy shops, none of it caught my interest. I was drawn instead to the displays with bars of chocolate, containers of hot chocolate, and empty cocoa pods. 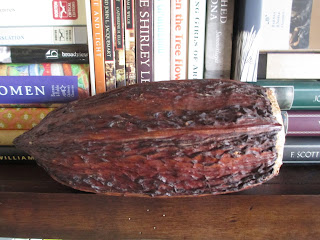 Taza Chocolate used to sell cocoa pods on their website for $15, and I'd always planned to buy one, but I just never got around to it (I don't buy much online). So when I saw these in person, well, let's just say that we asked if we could buy one (they were pretty obviously display items), and they said yes--they just had to check on the price. It was $15. I was pretty excited for the chance to hold a cocoa pod for the first time. It's sliced open on one end to get the seeds out, so it's nice and dry. It feels just as you would expect it to feel, kind of like bark, rough in general but also sort of smooth in sections. 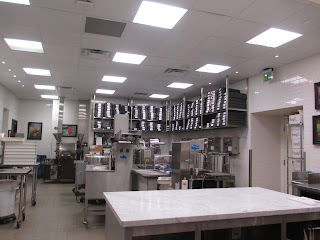 Given how I quickly zoomed in on the chocolate bars, one of the salespeople quickly asked me if I'd been in before and let me know about the free chocolate tastings that they offer (which I had heard about beforehand). Here's how it works. 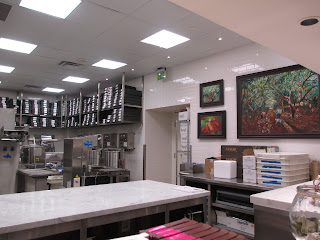 In the back corner of the store, there is a bar with stools and behind that bar is Hexx's little factory. You can see the chocolate going through the refining process. During the day, they offer short tours, but I was there at around nine at night so I don't think that was going on anymore (we actually went out here straight after changing clothes after the wedding--partying it up at the chocolate bar, I know). But back to the tasting. There is someone at the bar who sets up small pieces of all of Hexx's chocolates (either milk or dark--I kind of wish I'd been able to taste the milk, too, but of course I had to choose dark) on a plate and card. So everything is labeled with the cacao origin, the cacao percentage, and the flavor notes. The pieces are nice and tiny so that you have just enough to taste the chocolate without getting weighed down by too many pieces--which I'm sure is also what enables Hexx to offer this without charge. 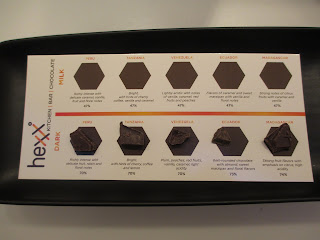 It's a really nice way to get to taste their chocolate before buying it, a chance to see which one is your favorite before you commit to a particular bar. And the plates/cards make it all organized and simple to see everything at once. Overall, I was impressed by the complexity of the flavor notes: especially when tasting the chocolate one after the other, they all still held their own unique set of flavors. I chose the Tanzania as my favorite and bought that bar. Next I think I also liked the Ecuador and Peru. 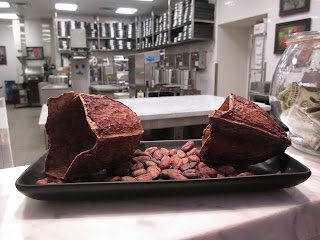 Hexx's chocolate bars come in white card boxes. While white can sometimes look more mass-produced and cheap-masquerading-as-refined (like a bar made by Target or Wal-Mart that you don't quite realize at first is made by Target of Wal-Mart), it works for Hexx. They're trying to fit in with a sort of casual, Vegas look while still offering something of quality. So they add a funky, modern touch while also offering all the info: Tanzania cocoa origin, Kokoa Kamili, 70% cocoa content, flavor notes ("bright, with hints of cherry, coffee and lemon"). 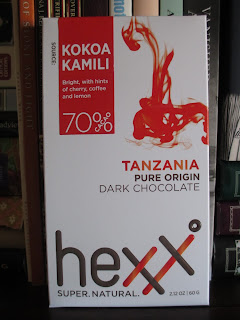 Hexx is the only bean to bar chocolate maker in Vegas (I would expect in Nevada, too, but don't quite me on that: it's just a guess). That fact alone drew me to their shop out of curiosity. They sweeten their chocolate with organic coconut palm sugar--something I don't think I've come across before. (The dark chocolate only has two ingredients; the milk chocolate also has vanilla and milk.) To them, the choice to use palm sugar seems natural because these trees grow in the same areas as cocoa trees, and they also feel that the flavor complements the chocolate without distracting from it. I wonder if some of the extra flavor that I got in the chocolate was partly from this particular type of sugar, not just from the conching (refining to bring out the flavors) (Hexx likes to take their time conching: their process lasts at least 72 hours). The more I taste the chocolate, the more I imagine I can taste the flavor of this sugar--like sweet, almost bitter fruits. It's just a little different from other chocolates, and that makes it intriguing.

You'll note that the palm sugar is organic but the cocoa is not. Nor is there any mention of fair trade or anything like that. So just take note of that. 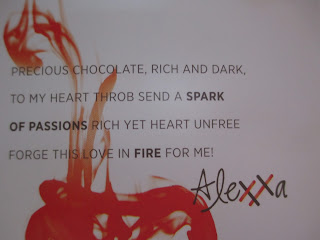 The back of each card box comes with another poem type quote, this one is about chocolate sending a "spark of passions" and setting you free and suchlike. I guess it's okay: kind of silly, kind of serious. The chocolate is also sealed up in a silver wrapper with sets of x's on it. Very . . . bewitching, you could say. 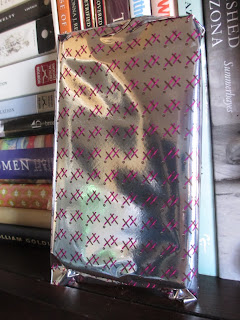 Quite enticing is the look of the bar itself. I don't know if the design is supposed to have something to do with witchery and witchcraft, but it looks like a honeycomb to me. The hexagon pieces come in to a total of fourteen, all with their little x's. Now, these bars look like a decent size when they're in their boxes, but they're on the small-medium size at only 60 grams because there is a lot of empty space due to this shape. So at $7 for 60 grams, they're on the pricey side, even for bean to bar chocolate.

While this design is absolutely lovely, there are a few too many air bubbles in it for my preference. I know that air bubbles just prove that a chocolate is molded by hand, but when a company talks about how they take their time conching chocolate, I kind of want the molding to be a little more careful, too. Especially when the mold is this good-looking. 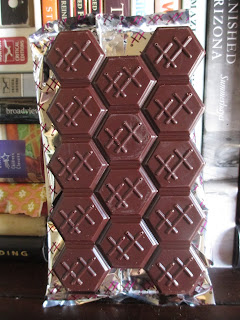 Anyways, on to the chocolate. It has a spicy aroma, tangy and almost bitter in earthiness. It seems that you get the coffee right away, followed by the cherry, and then the lemon and perhaps back to the cherry. Cherry seems to fill in the middle space, sort of sweet while still somewhat tangy, smoothening out into a chocolate flavor that finishes with just a little more earthiness. The aftertaste is warm and spiced. The texture is smooth without being at all plasticy: in the beginning, it felt almost slightly dusty but perhaps not really, after all.

Even bringing this bar home, away from all the lights and excitement of Vegas, I'm still impressed and still really enjoying it. I'm almost trying to find something wrong with it because I can't really believe that I found a chocolate this interesting on the Las Vegas Strip.

I forgot to ask how long Hexx has been around. Even if their shop almost disguises the chocolate behind the novelty items, they're obviously put a lot of thought into how they make these chocolates. I know it's a controversy in the chocolate world about how much to bring out the flavor notes (some companies claim that they don't "over conch" like others do)--but I think all chocolates have their time and place. Sometimes I like chocolate that just tastes like chocolate. And often I enjoy tasting all the different flavor notes: it's like going on an adventure with just one bite. Which is exactly what Hexx Chocolate seems to be after.
Posted by Deanna Skaggs at 9:40 PM