Primeval (that wonderful British sci-fi show that ran from 2007-2011) is stalking me again: suddenly everything is coming up again to remind me of it and to make me homesick for it. (I'll watch it again soon . . . I'm just a little busy right now.) Milka reminds me of Primeval because it's a Milka bar that Becker brings back for Jess in one of the episodes. And Milka bars are pretty good, too, when you just want a sweet milk chocolate. I've been trying out some of their cookies lately at World Market. The cow-shaped biscuits with chocolate on one side (I forget what they're called) are good, but these are my favorite so far. 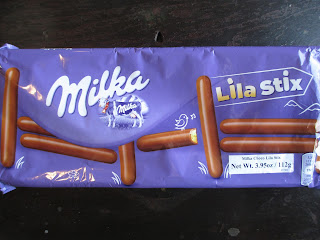 Lila Stix come in Milka's usual purple coloring. A brown tray is designed to hold the sticks in place, but I found nearly all of them off to one side, piled on top of one another. Not particularly pretty--but they're just casual cookies, after all. They're just cookie sticks dipped in milk chocolate; pretty simple. Reminiscent of Pocky, though not so thin. I happened to be craving a little something sweet when I opened the bag one night. 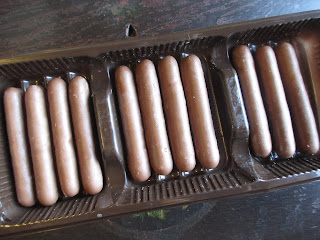 They're not really that much like Pocky. That slight extra thickness distinguishes them, making them in fact less like sticks but more like slim biscuits or cookies. What they remind me most of is Twix. A thin cookie covered in chocolate. Twix have caramel and these don't, but the biscuit part is sweetly flavorful enough that it almost has a slight caramel taste to it. And Milka chocolate has some caramel notes of its own, anyway. So Lila Stix are sort of like Twix--only better. 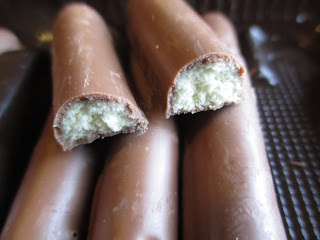 The chocolate is better (as far as chocolate in candies and cookies goes, of course). And because there is no caramel to slow down the eating, the crunch is better, too. Like with Doritos, where you think the taste is what matters but it's really the texture, Lila Stix are about texture. The cookies are soft and crunchy, just enough softness to blend with the chocolate and just enough crunch to make you want to keep eating and eating them.

And that's exactly why I didn't want to stop.

Other than that, though, there is nothing more to say. They're just cookies, casual cookies, nothing special--except that they're good to eat.