Yesterday morning, I flipped my calendar over to reveal this charming picture for March. February was pink and pretty with a peacock with flowers in its feathers. March, however, is dark blue with curly serpents whose scales are are turning into leaves. I tried to think of how pretty the swirls in the snakes were (I don't like snakes to be used as a symbol only of evil, after all), but honestly I was a little frightened of the image: March is when I start watching out for snakes (this is Arizona, remember), so it was as if the calendar was telling me that the time of danger had come. 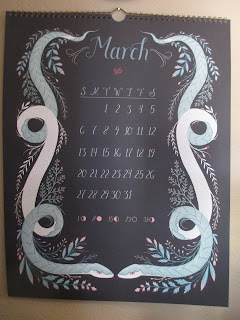 That got me thinking about irony. Last night I decided that today's post would be about the irony of springtime and snakes. Spring is supposed to mean the coming of life after a winter of sleep and bareness. We all feel more alive when winter starts to fade. Plants come out, the sun comes out. And snakes come out. Now, snakes certainly aren't evil and they're in fact helpful in many ways (Do you like rodents running all around? No, I didn't think so). But you have to be on the lookout because most people who got snakebites got them because they didn't see the snake; they either stepped somewhere or put their hand somewhere that they couldn't see. So in order to avoid that, you have to carefully watch where you're going (snakes blend in so well). And therefore springtime, with all of its life and happiness, comes also to mean the time when you have to be on your guard against frightful bites (yeah, people don't really die of snakebites anymore, but they hurt and can put you in the hospital for a bit, too, depending on the details).

Before I had the chance to write my post, though, guess what happened? We found the first snake of the season. (Usually we don't find one until late summer.) It was a little gray one with spots or other markings. I'm not quite sure what it was, if it was a baby or just a small snake. I have a couple of possibilities, some more and some less harmful. It's gone now. But it startled me a little: it was in a place I walk through twice a day, a place where I could easily have bothered it without seeing it. That memory is all gone, but this image remains . . .