While I did manage to finish reading Star Wars: Canto Bight, the last book in the Journey to Star Wars: The Last Jedi group, before the movie came out, I didn't quite have time to put together a post before I watched the movie. The difference in writing this up now or then is small, though: either way, I don't have a huge amount to say about Canto Bight. Also, I'd mentioned I was doing three Star Wars posts this week. I had hoped to do one last post with pre-Last Jedi thoughts, but again, I just didn't have that ready in time. So it'll only be these two for this week. 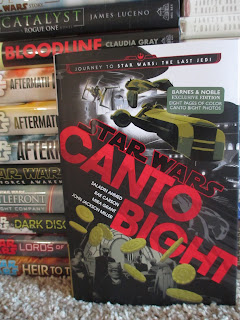 This book is a collection of four short pieces by Saladin Ahmed, Rae Carson, Mira Grant, and John Jackson Miller. The first one is more of a short story, but they get progressively longer; by the end, you might almost call the last one a novella. Each one focus on a different story in Canto Bight, which is basically the Vegas of the Star Wars universe.

Instead of enjoying the time looking at this edgy scenery, I found most of these stories frustrating. Frustrating in the situations in which the characters find themselves. People who are poor or downtrodden or down on their luck or overwhelmed, trying to make their way or mingle through this world of many, many individuals with many, many motives and methods of carrying out those motives. Stories like this weren't really pleasant for me to read--and they certainly didn't make me excited about Canto Bight.

Which, honestly, was probably the intention. Everybody's supposed to love the Mos Eisley cantina because it's the place where the story of the heroes launches; it's the exciting new place that acts as a portal into a wider world. Canto Bight, on the other hand, is the small world: the world trying to hold on to lavishness while holding everyone captive.

I didn't really care for the first story; the other three were better. I guess it was a good book to read--and now that I've seen the movie (this isn't a spoiler) I can say that it was nice to be familiar with a place before seeing it onscreen. I just don't feel like this book built up excitement for the film in the way that the Journey books tend to. Before the Awakening built excitement for The Force Awakens. The Legends of Luke Skywalker was a great read before The Last Jedi. But this one felt a little small and insignificant--and a little depressing (depressing is probably too strong a word, but you get the idea). It was too specific a corner of the Star Wars universe, I guess: we saw the dark side without seeing the hopeful side that is central to the Star Wars tone.
Posted by Deanna Skaggs at 4:55 PM