The idea today was to continue with some wintry flavors with the Mint Cocoa Nib Crunch from Untamed Confections. I find, however, that we are missing the mint element--but more on that in a minute.

This bar has the usual look for Untamed Confections. They package their small, 34 oz. bars directly inside white card boxes in order to waste less materials. The bar has mostly a plain design, just with the company's catch phrase in the center. The ingredients are the usual, as well: the chocolate is fair trade and the only added sweetener is honey. 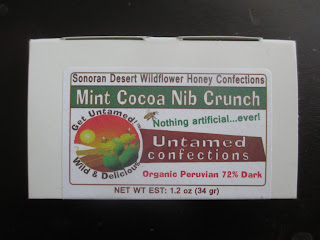 I found it slightly odd that I wasn't picking up any mint scent from the chocolate (just a deep cocoa aroma). Sometimes, however, there are certain tastes that don't make their way into scents. The thing is, that isn't what was going on here: it turns out that there isn't any mint in the flavor, either. The chocolate tastes like honey on the tongue, then deep cocoa (not extra dark or bitter since this is only 72% cocoa content), and then like that particular taste that honey and chocolate get when they are combined. But no mint. That is, I start to feel like I can sense, if not taste, the mint after the chocolate has melted away, but that could just be my imagination. 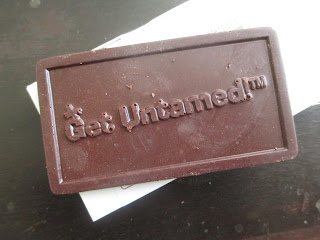 The nibs are nice, though. They're small and added in at just the right amount so that you can crunch on them a bit without having them take over. They sort of flow as a natural extension of the chocolate, so I would in fact say that this is one of the nicer combinations of chocolate and cocoa nibs that I can remember having.

So the chocolate, for what it was, was nice. Honey chocolate with cocoa nibs. But what happened to the mint? Did I let the chocolate get too old before tasting it? Usually Untamed puts a best by date on their packaging, but I don't see on here--and in any case, I don't think I waited that long. Mint is usually one of those flavors that sticks around. Did the wrong bar accidentally get packaged in the mint box? Possibly. It's happened to me once or twice before with other companies (and there is no question of getting the wrong bar when you get chile chocolate instead of rose chocolate). If that's what happened, I hate to be drawing attention to the fact with this post--but I did enjoy the plain chocolate with nibs.
Posted by Deanna Skaggs at 1:51 PM