It's Star Wars week. Here is the part where, rather than being just excited, I get nervous at the prospect of the movie being out already. While we all wait, here is my first of three Star Wars posts coming this week.

I've had James Luceno's Darth Plagueis for a while now; I wanted to read this book about the Emperor's Sith master after hearing some people guess that Snoke might be Plagueis. Now that The Last Jedi is within tangible reach, I had to scramble to finish this book before the film's release. Maybe we will learn nothing new about Snoke--but maybe we will learn something that will put to rest most of these theories. I had to see what I thought of it all before we, possibly, reach that point. 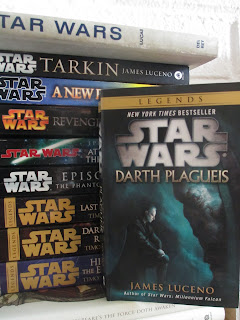 This book is in fact as much about Palpatine/Sidious as it is about Plagueis. We see Plagueis's start and how he first met Palpatine and took him on as an apprentice. We see their scheming to alter the political turnings of the galaxy and make everything ready for Palpatine to take over. And we even see a bit of the events from The Phantom Menace, except that this time we're seeing it from the perspectives of Sidious and Plagueis.

Sadly, Darth Plagueis was published in 2011, just before the new canon took over. So technically it's part of the Legends/EU, but most of it reads like it could be part of the new canon since it is one of the newer publications (as opposed to something like the Thrawn trilogy, which read as something very much separate from the new stories). I kept on reading and thinking, oh, so that's how that happened--that sort of thing--except that these things did not technically happen anymore. Ah. So confusing. Most of this book seems like it could become officially part of canon again later--but possibly some things would be tweaked if in fact, for instance, Snoke does turn out to be Plagueis (or Sidious, though I lean less toward that theory).

Obviously Sidious's focus on keeping a body alive after it has died and thereby rendering a person immortal suggests that he could be Snoke. But do Snoke's methods and aims, so far as we are aware of them, line up with Sidious's? I don't know that they do. I will say this: this book talked so much about the nature of the Force and the Jedi's use of it versus the Sith's perspective that I think I finally begin to understand what the new films and shows are expressing about the Force. That is, the growing conclusion that there is no "dark side" of the Force; there is only a dark way of approaching the Force. This doesn't have to mean that a person can't make wrong or even evil choices; it just means that the Force itself isn't "dark."

I am glad even just for that line of thought to have read this book before the new film. Although it wasn't a title that jumped out at me from all the EU books (as I mentioned, I only read it because of that Snoke theory), having read it I would put it on my list of EU books to read. Sure, the political side can get a little boring (to me, at least) at times, but all of the talk about the Force and the way that Sidious and Plagueis are going about their dark plans makes it all well worth it. It's quite a fascinating story to hear.
Posted by Deanna Skaggs at 12:58 PM