Time to try something new--that is, newer than usual. Coffee & Coconut Milk Chocolate from Stone Grindz. The coconut here isn't an added flavor in the usual way: Stone Grindz has added the coconut during the chocolate production, as opposed to adding it in after the chocolate itself has been made. That's why this is "coconut milk chocolate" rather than "milk chocolate with coconut."

When I first heard of their coconut milk chocolate, I thought that it would be one for me to pass on: I'm not generally a big fan of coconut. But when I tried a sample of the Coffee & Coconut Milk bar, I was instantly amazed. 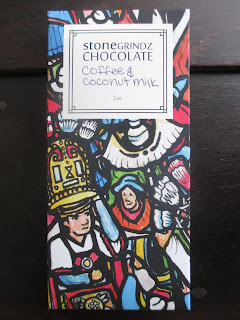 As you might be able to tell from the picture (it may have photographed slightly lighter than it appears in person), this chocolate does look lighter than the usual dark chocolate from Stone Grindz, though maybe not quite as light as most milk chocolates. It smells strongly of fresh coffee, blended with cream and cocoa. The instant this chocolate hits your tongue, the texture puts you in awe. It is utterly smooth, unlike any other chocolate that I can remember tasting. I don't mean that overly smooth, plastic texture that some cheap-pretending-to-be-fancy chocolates have; no, no, this is completely different. This is truly like silk. The melting rate is quite quick. 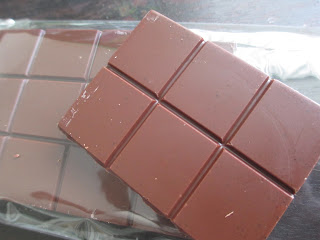 For others who might also worry about the coconut, you should be fine. I don't really taste the coconut at all, except possibly as a slight aftertaste. Likely this is also because there is the added coffee flavor to cover up any coconut--but for whatever reason, this isn't really a coconut-flavored bar.

And the chocolate? It's like milk chocolate--but not. It's sweeter, creamier, and lighter (yet still extremely rich) than dark chocolate, but in a different way from milk chocolate. The cocoa flavor here is much stronger than what milk chocolate tends to have, as well. The cool part? You don't get that greasiness that pretty much inevitably comes, at least to some degree, in milk chocolate.

The coffee flavor comes across nice and fresh. It goes well with this type of chocolate because the effect of all the coffee, cream, and cocoa notes put together is like drinking a cafe mocha. The coffee doesn't come out so strong that it overtakes everything; it's more of a companion to the chocolate.

Truly this is a fabulous bar of chocolate. So new and different to me and yet so inviting. Sweet yet rich. Deep yet soft.
Posted by Deanna Skaggs at 4:43 PM