Sometimes packing gives a clear concept on what you'll encounter--especially when you've been looking at chocolate the way that I have been doing and for as long as I have been doing it. These, though, took me for a loop.

They were register impulse buys because I thought, oh, those look like some good fair trade chocolate candies to review. Simple, right? Even the honey chocolate quality felt like something with which I was already familiar. So I thought that I knew just what these chocolates would be like. 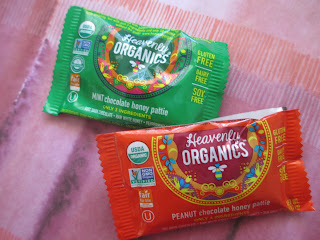 Nope, nope, I was wrong.

To start with, sure, they give that look of alternative candies. Bright colors (one in green and one in red-orange) and fun patterns along with all the little labels off to the sides advertising their greater qualities. Cute and fun and informative at the same time--standard for this sort of thing so far, right?

I opened the packages to find a strong chocolate aroma with quite a bit of nuance. That was more than I'd been expecting, though at this point I simply took it to be an expression of quality (that is, good quality). This was the point, though, where I noticed that the package says "100% dark chocolate." Wait, 100% chocolate in a candy? Unheard of. So they must mean that they added 100% chocolate to honey, right? They can't mean that the chocolate is 100% cocoa because that . . . that's just not something people use to make candy. Right?

Wrong. Immediately on biting in to the Peanut Chocolate Honey Pattie, I tasted the bitterness. That full bitterness that only comes with such dark chocolate--not the light bitterness or even strong bitterness you might find in a more standard dark chocolate. I then tasted some peanut butter, and then more bitterness. There was a chewiness to the peanut butter (from the honey, of course) that gave it a pleasant, old-fashioned candy feel. I especially liked this taste/texture because it showed that this candy isn't trying to be a Reese's Cup like everyone else is. I don't mind other companies trying to replicate the Reese's experience, but it isn't the only way to approach peanuts and chocolate. So the peanut element is pretty great, though also quite different from what you might expect. Essentially the filling is a flavored honey (raw honey, though, of course, which is why it has a chewy rather than liquid texture).

Overall, though, what's it like? It's, whew, is it really candy? The honey peanut butter element is certainly candy, but I can't wrap my head around candy with chocolate this dark and bitter. It's cool and it's neat but wow, it's bitter. If they had made it even an 80% chocolate that might have helped. I imagine they were trying to avoid adding too much sugar--but that's why you make the chocolate with honey instead of sugar, not just use the honey for the filling.

The Mint Chocolate Honey Pattie uses peppermint oil, which is of course quite a strong ingredient. So I mainly taste mint with it--nice and strong and sweet, with a robe of dark chocolate. Nothing bitter. Completely different experience than with the Peanut Pattie. Much nicer and definitely something I'd be open to buying again.

So was it just me? I went back to the Peanut Pattie and tired again. Not as bitter. Maybe I'd just gotten a particularly chocolatey corner? I still taste what I'd call a tad too much bitterness, but with more honey this time and not so strange anymore.

Quite a journey, then, these "simple chocolate candies" took me on. Despite the loops of my travels, I like the product Heavenly Organics has set up here. I'd definitely want to try more of their flavors--and see how they compare to my experience with these two.
Posted by Deanna Skaggs at 9:19 PM