A Truncated Look at Wildlife and the Fear Concept

I say that this is a truncated look at Wildlife World Zoo & Aquarium because I didn't end up walking through the whole park and I took very little pictures to share on here and I'm also ending this post on a roundabout topic. The only other time I had been to Wildlife was probably about 17 years ago--so they've expanded and added quite a bit since then. Yet mainly I think we stayed on the original part of the park.

What's quite nice about Wildlife is that it has somewhat more of an Out of Africa feel than the Phoenix Zoo does--yet it has been at its location for long enough that it has much of the wonderful tree growth that the Phoenix Zoo has. I always say at Out of Africa that I'd rather the animals have it well than us; I'd rather any money go to make them happy. But trees are nice, all the same. Wildlife has a good amount of shade for a hot day or just to create outdoor atmosphere. 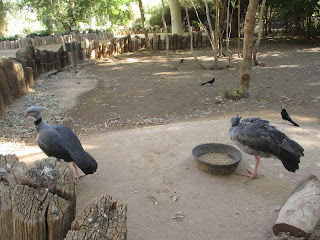 Certain animals I'm used to visiting at Out of Africa, so what was nice from Wildlife specifically? Birds, definitely birds. They have a varied assortment of birds, large and small, familiar and exotic. A precious turkey, a condor, a king vulture, and ostriches were among my favorites. Their Dragon World exhibit was naturally another favorite of mine. While he wasn't in Dragon World, their white alligator was gorgeous; he's like a sculpture of soft marble. 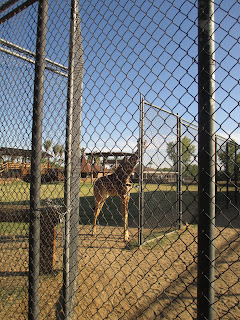 We saw their young giraffe. Goodness, they have so many giraffes. And I can't remember ever seeing a young one before. He was especially cute to see because he's already so tall that he doesn't look small--so he just makes you double back and realize how tall the adults are. 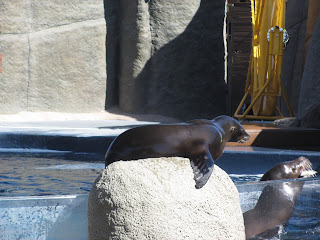 And then there was the aquarium side. I'm sure I've mentioned from time to time that I have something of a fear of aquariums. For the last close to twenty years, I've just been avoiding them entirely. Last time I went to Wildlife I waited outside while my family went in--even though I was only about eleven years old at the time.

Today, though, I'm trying to overcome that fear. Actually, I'm trying to dissect it and discover where it comes from so that I can mend that, but that's another story. Point is, I specifically wanted to go in some of the aquarium buildings on this trip. And goodness, what shocker that first one was. It was the River Monsters building. I walked in and it was dark and the tanks were kind of hazy in the back (that's what bothers me most, I've realized) and there were faux trees (that almost bothers me most than the water, I've learned). I wanted to back out. Or cry. Or run out crying.

And then a field trip group walked in. Ten kids running around and talking in excitement about the fish did wonders for me. They grounded me and focused me. I looked at the fish. I looked at the walls that made up the back of the tanks, reminding myself that I could see the whole tank and everything in it. I focused on the clear space where we were all walking. I focused on aquariums as something that we all go to see out of interest. Throughout the other buildings, I still had to remind myself sometimes (audibly, of course, because it helps to say out loud that you're in a bit of a struggle) that it was okay. And you know what? It was. I mean, I'll still not make aquariums a destination, but I'll try and not avoid them anymore. I'll try and not avoid fear anymore. I'll try and explain why I'm afraid and then explain why I don't need to be.

Posted by Deanna Skaggs at 1:46 PM