I am reminded that fall is my favorite season. It would seem that it should be spring, but as beautiful as spring is, there is something agitating about spring. Fall, on the other hand, is comforting and cozy.

As far as the fall holidays go, I'm not so big on Halloween as everyone these days seems to be. I like dressing up and I like candy and bats are pretty, but the rest of it? I'm just not interested. So right now that everyone is all in the Halloween mood, I'm excited that Thanksgiving is coming up.

Perhaps Thanksgiving gets hyped less because its theme is not commercial--and unlike Christmas, it still retains that good core. (Okay, Christmas does, too, to many people, but it has that highly commercialized exterior.) Yet I do like to put out all my turkeys in November, and I do like to buy a little Thanksgiving something at the stores just to show that hey, there are those of us who like Thanksgiving, too, not just Halloween or Christmas.

You have to be quick about it, though. Stores put out such little Thanksgiving merchandise (apart from the foodstuffs that come later, of course) that you have to nab it right when you see it or it'll be gone. 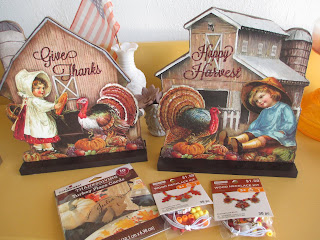 I do like the vintage-inspired signage that you can sometimes find, so I picked up these two at Hobby Lobby earlier in the year. They somewhat go with my Victorian-esque style.

At Wal-Mart, I got place cards not because I necessarily needed any but just to get something. And also because the name (Julia) they used for an example is the name of the character in my novel--and as you'll know if you've read my book, Thanksgiving was her favorite holiday. 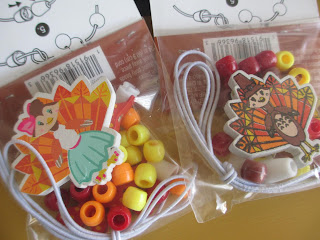 At Michael's, I found these two necklace kits. I guess they're designed as a craft for kids to do on the day of, but I just wanted the wooden turkeys for me. I'll make a necklace or bracelet or two without the plastic beads. 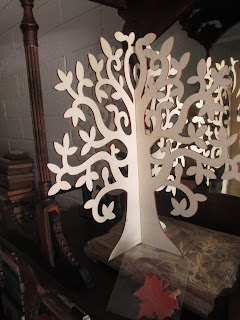 I also got a wooden tree there. It's two flat pieces of wood that fit in together to make a 3-D shape. Perhaps I might try staining it at some point; I'm not sure. It has little leaves with space on them to write what you're thankful for. You then attach them to the tree. I thought that might make for a nice little sentimental thing to do. I don't always like the forced, flat sentiment, but this year I am reminded that I am in fact quite genuinely sentimental, so perhaps this will work. And you can always make new leaves year after year, always keeping the tree around. (I also just have a thing for trees, so maybe that's why I got this one--or it could be that it seemed like a genuine Thanksgiving thing, not a commercialized thing.) 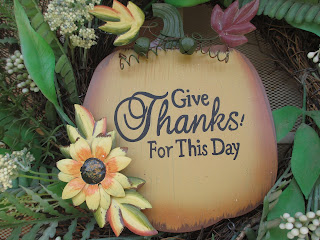