Well, Halloween is almost here, so I might as well go for some more chocolate candy. This will be the fourth Little Secrets product I've reviewed and the third of their Pieces, but the first plain-flavored one (the Dark Chocolate Pieces). I've gone about it a bit opposite, I admit: it's often nicest to try and plain option first and then work your way into the flavored products. 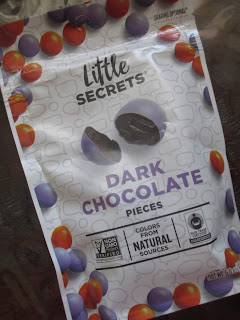 I do apologize if you can tell that I took these from the clearance shelf. They're a little more powdery-looking, but are otherwise just as great (they're still nearly a year away from their best by date). Initially I tasted the candy shell. While it may not seem so exciting to be able to taste straight sugar, this is candy, after all, and I like to be able to taste sugar as sugar and not simply get strange, unidentifiable flavors. I also tasted the chocolate on its own for, essentially, the first time, given that I have only had flavored chocolate from Little Secrets before. 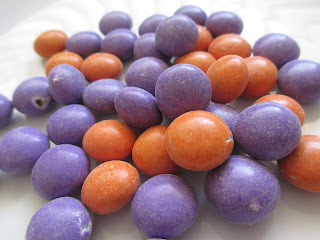 It's mild dark chocolate, more of the semisweet type than the candy dark chocolate type. Probably roughly around 55% cocoa content or so. It does have some of that fudge, brownie flavor to it, though not quite in that weird, thick-flavored zone that some confection-style dark chocolate can have. It is, of course, pretty sweet, but again, this is candy.

I probably wouldn't overly care for it as a chocolate bar, but in these I like it. Even for being so different than what most of us are used to with M&M's, the proportions work great. As I've mentioned, the Pieces are bigger than the regular brand of candy-coated chocolates. Yet the thicker and bigger style here still feels completely balanced, maybe partly also because I really haven't had M&M's in a while. The thing is, though, you have more of a chance to taste chocolate here with the greater thickness. And that's in fact quite nice: they're actually a chocolate candy.

So I'll continue the remarks I've made before: Little Secrets is doing a good job in the little chocolate candies department, giving a good-tasting, more natural, and fair trade option.
Posted by Deanna Skaggs at 9:06 AM