While I gave a less than stellar review of the Superfood Dark Chocolate from Compartes back in August, I decided to look at another Compartes bar for three reasons. One, this Apple Pie White Chocolate represents the second style of chocolate bars, the ones with sugary sweet things, that Compartes makes. Two, I do enjoy trying white chocolate. And three, I thought Apple Pie sounded like a good way to transition into the seasonal, fall offerings (there are so many this year that even with my stricter standards, I already have four of them to share). (Actually there were four reasons, not three. The fourth reason was that it was on sale. Now you know.) 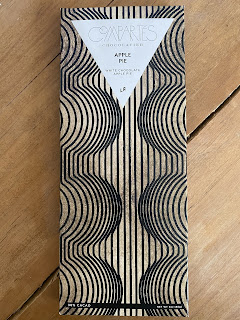 Again, nothing on here says anything about this being fair trade cocoa butter, so I'll probably be staying away from Compartes after this. I just really wanted a look at the other side of their chocolate styles. Visually, I prefer the plainer look of this packaging. The chocolate bar is in the same mold and the wrapper is the same, but the card box has just a simple geometric pattern to it in neutral colors. It's more to my style. Even though an Apple Pie White Chocolate sounds a bit eccentric, the simpler approach to packaging implies that the flavors will be approached tastefully. 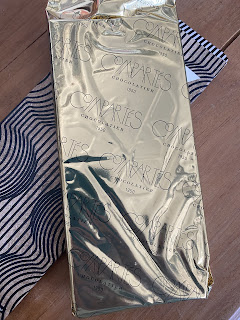 And you know, the ingredients are pretty good for such a product. Things like sugar, apples, cinnamon, brown sugar, flour, honey, whole grain rolled oats, butter, baking soda, and salt accompany the usual white chocolate ingredients. Whole ingredients like these rather than a pile of artificial flavorings and colors are definitely preferable, even if none of it is organic. 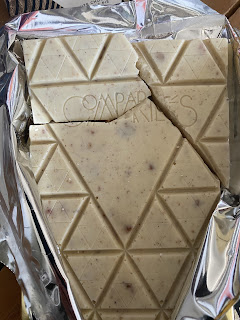 The front of the bar allows you to see some darker shapes beneath the white surface. It's a fun teaser. But it's the back that really shows all the chunks of pie sticking out. Exciting. Except that I would describe the aroma as sickly sweet white chocolate--with cinnamon. Maybe I've just been spoiled with the fantastically unique and rich white chocolate from Zak's; perhaps I ought to buy a Green & Black's white chocolate one of these days just to remind myself of a what a good, basic white chocolate is like. 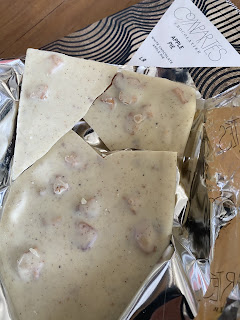 On my first bite, I found some dried apple. Not exactly the chunks of apple pie I was anticipating. Then I did get more of a cookie crunch, which I supposed was the pie crust element; this came with cinnamon flavor. Each bite does vary greatly on what it contains. That's always to be expected when something is sprinkled into chocolate, but the case is even more so here because there are different types of sprinkles. The description makes a distinction between crust and streusel, in addition to the apples.

So sometimes there are crispy crunches. Sometimes there are dried apples. Sometimes it's more like cinnamon clusters, which I suppose would be the streusel. Cinnamon is the strongest added flavor: the apples give more texture than flavor, and dried fruit texture isn't exactly something I associate with apple pie. On my first approach to this chocolate, I had to keep eating away at it just to understand what was going on with the different elements and to make sure I wasn't missing anything. But I wouldn't generally want to eat much of it at a time: the white chocolate is extremely sweet and buttery.

Often when I have a sweeter chocolate bar, like a milk chocolate or something like that, I eat it much quicker than normal. But this one is too much for me. If this were my only experience with white chocolate, I would understand why it isn't very popular. With that being said, this bar isn't overall bad (not amazing either, but not bad). It isn't terribly like eating apple pie, but the addition of cinnamon in white chocolate is pleasant. I find I enjoy it more with a cup of tea to balance it out. Or if you're crafty like that, I suppose it might make a nice dessert topping.

Posted by Deanna Skaggs at 3:25 PM