The Words You See

Generally, I'm not into all the signs with words (and if you are, I don't mean to be rude; I'm just expressing what I like). "Family" or "Laughter" or "Today is a day to have a good day" or whatnot. I would rather express than put up words. Words aren't decor to me. (And they're also a current decor trend and I mainly avoid those, anyway, so I guess I would steer away from the words trend just like any other trend.)

However, sometimes when there are words around so much, you find yourself putting them out, too. And it's kind of comforting. The most subtle one is this little Bible verse print out. I got it in a Christmas money gift a couple years ago and absently set it on this Victorian cracker tray (yes, they had cracker trays--isn't that awesome?) when I was unpacking my things. But it stayed and stayed and stayed some more until eventually I decided that I quite liked it. After all, I'm not really going to use the cracker tray for crackers (even if I wanted to, they would have to be tiny crackers barely bigger than quarters). So why not use it as a little display on my table for some words that don't stand out decor-wise but are a welcome reminder when you stop to look at them closely? 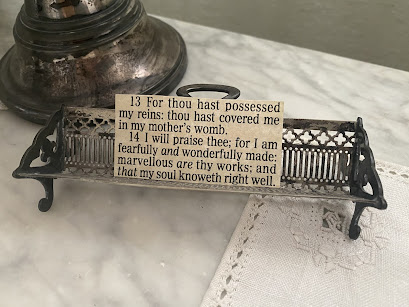 The one in my hallway (where I keep my "newer" pictures) has been there for the longest. I like Hobby Lobby, sure, but like I said, I usually steer clear of all the signs with words on them and Hobby Lobby is full of signs with words on them. But when I saw this one in the 90% off section, I rather liked it. It seems different, no? The metal actually looks like copper and it's more like a label, a statement than a decor sign. When I saw it, I thought, yes, that's what I want to declare for my house. (As it is a hallway and therefore rather dark in the picture, the verse is Joshua 24:25, "As for me and my house, we will serve the Lord.") 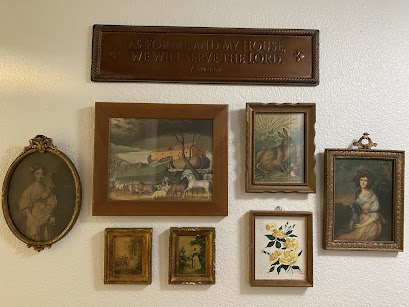 And then I was there again recently picking up a couple things and I saw these magnets. Some had generic things on them and others had Bible verses. Are you seeing the trend now? I'm still not so much into the sayings, but I'm okay with putting out Bible verses. Those are good things to contemplate. I often forget that I already have word magnets on my refrigerator; I use them so infrequently. What with the size and layout of my kitchen, the front of the refrigerator isn't hugely visible. So why not bend on my whole avoidance of signs with a little magnet that says something very special? 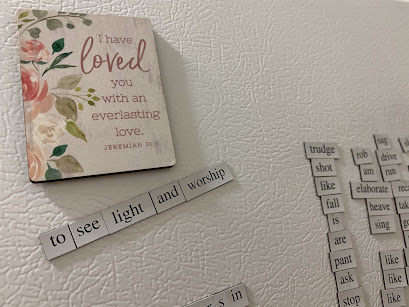 Posted by Deanna Skaggs at 8:28 AM