Last year's Star Wars: Myths and Fables was a fun new take on the Star Wars universe, so naturally it was exciting to learn that we would also be getting a Dark Side version. Sadly, Star Wars: Dark Legends is not so interesting a boo physically. While the first had that great dragon-esque picture with Obi-Wan, this one just has Darth Vader. I like Darth Vader as much as the next person and his design is great, but his face/mask is everywhere. These books are a chance to spark a different sort of interest, so I would have liked to see a more unique image. 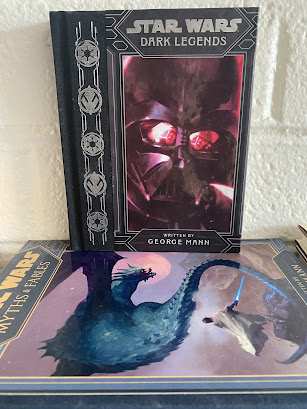 This book is also smaller than the first. It's a more standard size, still fairly thin. While that makes it less of a coffee table book (which is fine since the cover image isn't as interesting), the benefit is that it also makes it clear that this is primarily a children's book. For the first book, I mentioned not always enjoying the simplistic style--but if you go into a book knowing that you're an adult reading a children's book, then you can be more lax about the simple writing style.

And again, the style isn't just children's-book-style. George Mann writes as if these are mythological stories that have been passed down through the generations. Overall, these were a more consistent quality than in the first book. They also veer slightly to the tongue-in-cheek tone. I imagine they way in which the reader receives them is going to vary widely depending on the reader. A child reading them might find them a little scary. But an adult reading them will smile at the twist on traditional stories like vampires, werewolves, and Frankenstein. Rather than being dark to an adult, they're pretty fun.

They all come with a bit of a moral, too. From the title, I'd expected these to be the myths of the Sith, rather than simply stories about dark topics. So they do come with a bit of a warning to not repeat the mistakes of the characters. Some of them triumph against dark forces; others succumb to the darkness in themselves and face perpetual punishment. So it's very Dante's Inferno to see how they reach their inevitable end and their just rewards.

All this being said, this book is extremely Star Wars in that it has appeal for both children and adults, which is kind of rare when it comes to books.