Have you ever had a whole cocoa bean? We make chocolate from the seeds that are inside cocoa pods, and those seeds do undergo quite the transformation to become what we call chocolate. Eating a cocoa bean is something of the equivalent with coffee of having a shot of espresso. If you've mainly only had lattes, then that shot of espresso will be stronger than if you're already used to drinking black coffee. So if you mainly eat chocolate of a lower cocoa content (whether it's milk or dark chocolate), then a cocoa bean will be more of a shock than if you've eaten a lot of super high cocoa content chocolate. 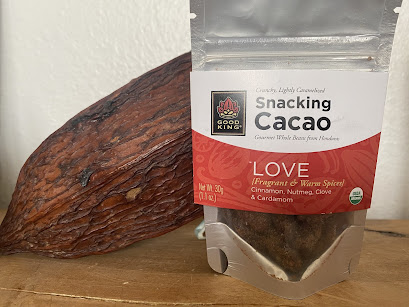 I've had cocoa beans before as a novelty, just to try them. Usually just nibbling on one is all I can manage; they're strong. Nibs are better because they're smaller pieces and they're usually either sprinkled on a bar of chocolate or dipped in chocolate. This Snacking Cocoa from Good King (which you can currently buy from Zak's Chocolate) is a new concept to me.

These are whole, lightly caramelized cocoa beans (so there is a tad of sugar involved). They come in plain or flavored. I figured I would need some other flavors to help with the strength of the cocoa, so I chose Love. These are the "fragrant and warm spices" of cinnamon, nutmeg, clove, and cardamom. 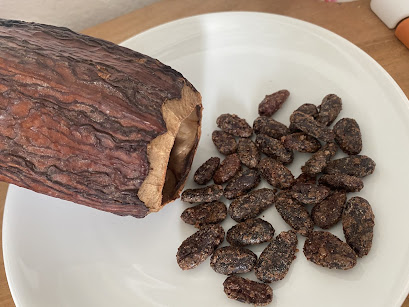 While the bag is pretty plain, this is one of the cases where packaging doesn't matter so much: it's the product that sells itself. And this is organic and fairly traded (the cocoa beans are sourced from Honduras), so we're good there. There's a little note on the back, too, about how these won't melt. And hey, that is a great thing, especially when you live in a warm region. You could in theory pack this bag with you on a hike for a sweet energy hit (and plenty to share with as many people as you want to go with because each seed is a hit already).

Opening up the seal reveals an amazing, warm smell like a good, fresh chai tea (none of that syrup or powder stuff). Or you could also say pumpkin spices, I suppose (which would make this the perfect fall snack). I cautiously bit into just half of one of the cocoa beans and came with a great flavor like Mexican hot chocolate (more like the Chocolate de Oaxcaca I reviewed a couple years ago than like Abuelita hot chocolate, but still the same concept either way). The combination of cinnamon and chocolate and even that crumbly, coarse texture of the bean gave it that welcome effect. 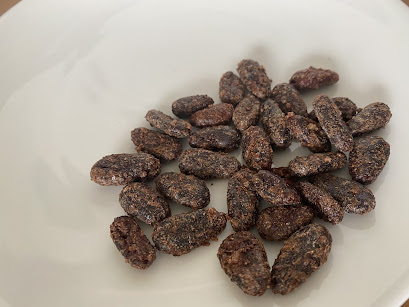 The spices are good and fresh. If you're a fan of these warm spices as I am, then you'll enjoy their flavor. They go well with the chocolate, too. The light caramelization gives a slight crispiness to the outside texture of the beans that's pleasant to crunch on. Your first couple crunches will focus on this part and the spices, then you move more into the crunch of the beans and their intense cocoa flavor. This is why I recommend if you're not having one of the smaller beans or if you've never had cocoa beans before, start with just half. They seem small but they pack in the flavor. It is possible to get so overwhelmed that you don't even want to look at them anymore. But that's all just going to depend on what your palate is used to.

On my first try, just half a bean was enough for me. A couple days later, though, I had two small beans. So snacking is an appropriate word in that most people will probably just nibble away at the bag piece by piece. It is a tiny bag, about 3 by 5 inches. But there is plenty in here (have I said that enough?). The packaging suggests pairing with cheese or berries or using on top of desserts. I would feel like they're too strong on their own to add to a dessert, but the idea of putting them on an appetizer board is appealing. While I have a feeling that even if I were to try all the other flavors I would still find Love to be my favorite, some of the simpler flavors might in fact go better with an appetizer board.

What's nice is that you can approach these cocoa beans in so many different ways. They can be that gourmet addition to your table or they can be something to throw in your hiking backpack or they can be a secret hidden inside your desk for mid-afternoon nibbling.

Posted by Deanna Skaggs at 9:28 AM