This is what happens when you let me loose in World Market. The Turkish delight was half off, so I bought four kinds. But you know, I also bought staple items like rice and pasta, so that makes it a grocery purchase, right? 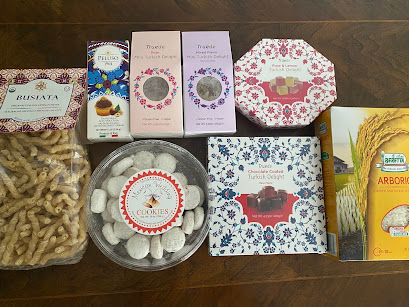 I think we all know (even if it's buried down deep) that Turkish delight is the treat that Edmund asked the White Witch for in The Lion, the Witch, and the Wardrobe. Many American readers long thought that it was an invented, fantasy food rather than a very real, commonplace candy in England. I had my first Turkish delight from World Market somewhere around fifteen years ago. It wasn't the best: it was almost hard in texture and the powdered sugar was very thick, thicker than what I've come to favor. But it was fun because it was like a bit of Narnia (rather than a bit of England). 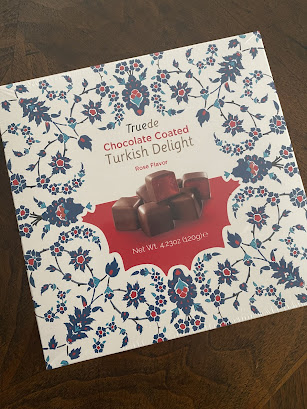 I've stuck by Turkish delight, though. The question of whether or not I actually like it or just like that it reminds me of Narnia gets a clearer answer when I point out that the traditional flavor is rose and I do love rose. We don't get much candy made with rose and yet I'm always quick to go for rose products. Rose tea, rose lemonade, rose truffles, rose pastilles, so why not rose jelly candy? That's what Turkish delight is, after all. 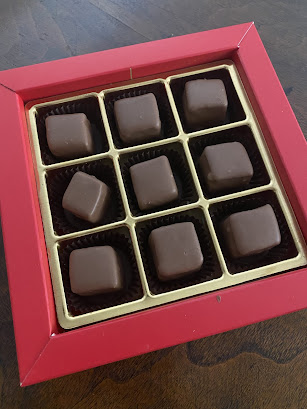 The Mini Rose Turkish Delight from Truede I did try out earlier this year. (That's also why I was willing to buy so much this time.) It was the best that I can remember having. Nice and simple and delightful. (It's also non-GMO, which is cool.) If you've never had Turkish delight before, this is a good brand to start with. Truede Turkish delight, by the way, is a Turkish product with an English distributor.

While the Chocolate Coated Turkish Delight doesn't exactly fit my normal standards for chocolate that I review, I do bend every so often and I thought I might as well go crazy by buying it, too, and then fully disclosing my crazy Turkish delight adventure. The tiny bit of chocolate gave me a reason to blog about it. 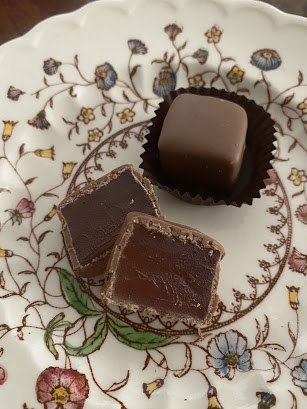 The box is quite beautiful. The bottom is red and the lid is white with a blue and red floral pattern. Inside, nine pieces of candy sit in their little papers inside a golden tray to keep them from tumbling around. I wasn't expecting so much formality from an off-the-shelf confection. The milk chocolate is fairly pale in color and the jelly inside does not look red and clear like in their picture on front. Instead, it is denser and more brown in color, with just a hint of red when you look at it in the light. If you squint, it just looks like a ganache.

The jelly texture is almost like that of a big jelly bean. Stiff yet also soft. The rose flavor is nice and is what I focus on most. The chocolate isn't very noticeable. It has little flavor; the benefit of that being that it doesn't add piles of sweetness. It's just a little twist on the traditional candy: instead of being coated in powdered sugar, it's covered in a very thin layer of chocolate. The proportions are just right. This isn't chocolate filled with jelly; this is Turkish delight coated in chocolate. Much better in both flavor and proportions than the Fry's Turkish Delight candy bar (which you can find from time to time at World Market, too), which is a thin chocolate candy bar with Turkish delight jelly inside.

It's an indulgence, a sweet confection, a pretty candy. Just the thing to keep on my kitchen table right now.