Let's finish Black Butterfly week with a boom, shall we? Or a pop, I should say. Or many little pops.
That's right, this red, white, and blue chocolate comes equipped with pop rocks, fitting it right into July/Independence month. I've had chocolate-covered pop rocks before (that was back when I was at Chocablog), but that was nine years ago and I'm not certain if I ever did have any within a chocolate bar. I couldn't be scared away, though, because this bar looks so fun that it makes the idea of pop rocks sound like a party. 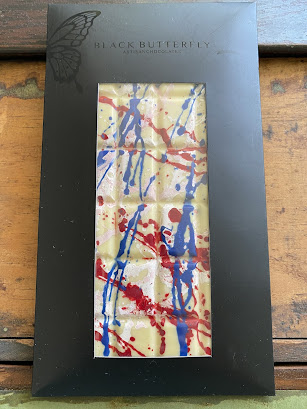 Red, white, and blue splashes decorate the pale surface on one side to create a colorful confetti. That's all I saw when it was in the package, so that was all I was expecting. Flipping it over, though, I found an equally energetic look with generously-sized, freeze-dried strawberries, raspberries, and blueberries. Wondering about the KaBoom? If you look closely, you can see little green crystals--those are the ones that go kaboom. 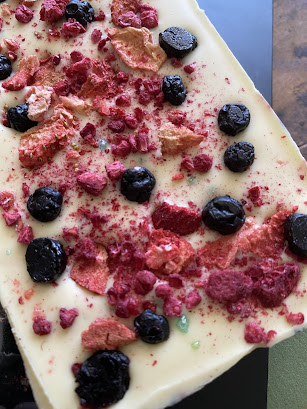 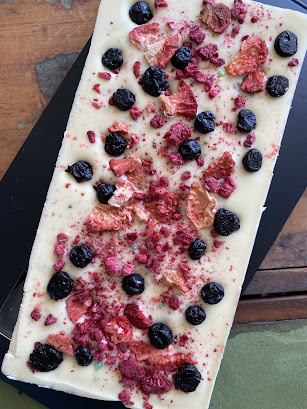 Now, for my first bite, I thought I had gotten out free without any popping, but they came in for the party once the chocolate was mostly melted away. Being white chocolate, it of course melts quickly. And the berries also encourage you to chew rather than let the chocolate sit in your mouth, and that also speeds things up. So generally by the time the chocolate and berries are fading, that's when the popping begins. 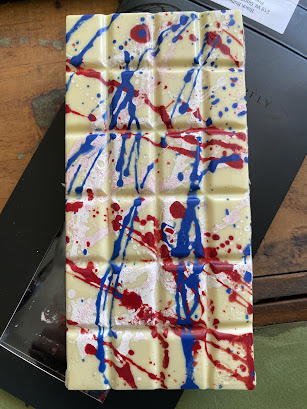 I have tried to bite in slower, but that's hard to do with the big berries and also makes for generally less enjoyment of the white chocolate. So just go ahead and eat it like normal and allow the bubbling, kaboom effect to come as the afterparty. Pop rocks are one of the strangest things that we choose to eat. Yet I wouldn't say that these were as distracting to the experience of the berry chocolate as I'd feared they might be. (Has anyone been to the dentist in the last couple months? Part of the precautions at my dentist included swishing hydrogen peroxide in your mouth when you arrive. The pop rocks here reminded me of the bubbling hydrogen peroxide between my teeth. Fun times, fun times.) 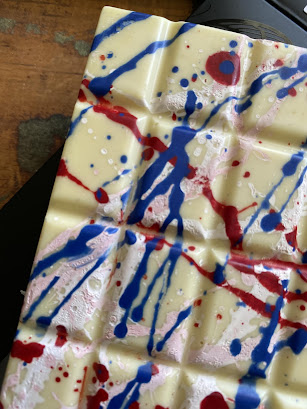 Going back to those berries, though, like I said, they are generously-sized and plentiful. Being so full of flavor, they go well with the white chocolate and create that berries and cream effect. If this chocolate weren't so full of pop rocks, I'd be tempted to devour it in one go.
So no, I wouldn't want pop rocks in chocolate to become a normal thing. Just every once in a while. This was a fun chocolate to try out. The red, white, and blue in July brought up Independence Day and fireworks. And the pop rocks brought a little excitement into my life. KaBoom!
Posted by Deanna Skaggs at 12:02 PM