Today's chocolate bar from Black Butterfly includes more tea from Nectar Apothecary. Nectar is still open, by the way, you just have to order by phone now instead of going into the store. So you can place your order, stop into Black Butterfly for some chocolate, and then by that point your order should be ready to pick up at Nectar. Snazzy, eh? 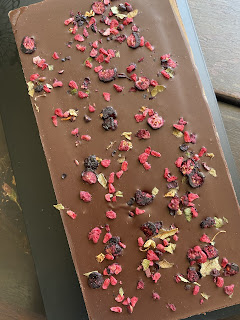 This tea is the Patagonian Super Berry Tea, sprinkled once more on the 61% dark chocolate. I have to choose the bars whose flavors appeal to me, not just the ones with the colors I like best. But this one definitely drew my eye, as well. The even, red scatters remind me of a Victorian, poplin fabric in a pretty floral. In fact, the floral allusion means that this bar would go particularly well with a bouquet of flowers if anyone is in the gifting mode. (Let me here note that the chocolate's color appears much lighter in the pictures than in person.) 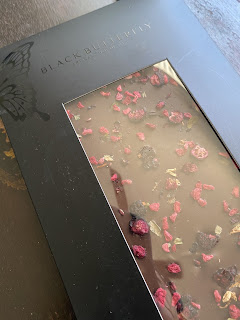 Opening up the black sleeve reveals that familiar sweet dark chocolate aroma. While the lower cocoa content generally goes well with the style of these bars, I also wouldn't mind sometimes going a little darker. Hmmm. I now find myself uncertain whether or not there often tend to be milk chocolate bars in this style. I did also pick up a white chocolate bar this time, but that isn't common. I guess all this is to say that while this dark chocolate is fine, I do welcome some variation, too. 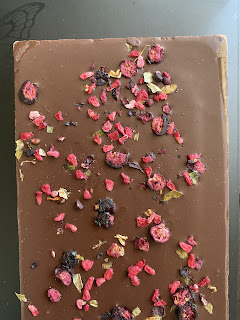 I immediately tasted the zing of the berries on biting in--especially because I bit right into the middle instead of going for a corner. I wanted to dig in to the tea right from the start. What's interesting is that while the tea layer did at first seem much more even than in the Patagonian Wild Guava Tea bar, the layer is also much thinner. So while you're more likely to get tea in each bite, you're also getting less than with that thick snake swirl in the other bar. I don't say this as either criticism or even praise; it's just different. And I do like that.
Each of these bars looks different, whether because it has tea or chunks of ginger or because it's red or blue or because it has an even sprinkling or a patterned one. So then each one is a different experience, a different layering of visual, texture, and flavor elements. 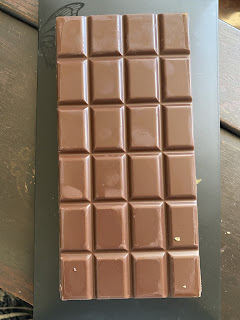 The exact components of the Patagonian Super Berry Tea are maqui berries, blueberries, raspberries, red wine grape skins, Hawthorne leaves, currants, and natural flavorings. While I can't necessarily distinguish each from the other, I do notice that some bites have more of a zing than others. Being that this is a tea that all of these berries come from, the experience of eating them is a tad different from the usual appearance of raspberries in chocolate bars. They have the feeling of being smaller, whether or not that is in fact true.
I do notice that sometimes I find a very hard and crunchy texture. On examining what was causing this crunch, I found what appeared to be a small, round seed, something like a smooth peppercorn. I'm not familiar with maqui berries, so perhaps this is what their seeds look like? These crunches are a little distracting, but not too much.
And I guess even that is part of the fun. These teas seem to add the advantage of common ingredients (like raspberries) with less common ones. So it gives an exploratory feel, a sense of trying something new while still getting a comforting bar of sweet dark chocolate.
Posted by Deanna Skaggs at 7:16 AM