I felt certain that I had reviewed Zak's Chocolate's Peru Maranon bar before--until I checked against my labels and didn't see it. Checking for Peru Maranon, though, brings up the one from Ritual Chocolate that I looked at last August. That one came in at a standard 75% cacao, while this Zak's bar is 87%. You can buy it from them in 70%, as well, or even the three bar flight that also includes a 99.9%. Usually the 80's range is what I gravitate toward when it's available (I say when because for most companies, 70-some is the standard). 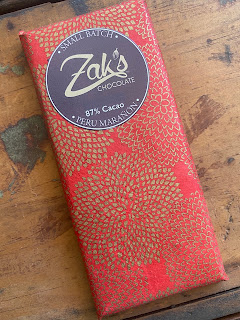 The smooth and silvery chocolate aroma I once again wanted to describe as smoky yet still found the word not quite right. As the chocolate begins to melt, there is a light bitterness that develops into a lightly deep taste; it is rich and earthy. The flavor softens, with a tang on the edges, before coming to a delicate finish, especially for something that began with that feathery bitterness. 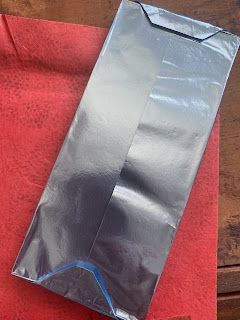 Granted, of course, the bitterness varies depending on when in the day you eat it. I always take my initial notes on chocolate around 11:00 in the morning; at 8:00 PM I still got about the same flavor, but there was zero bitterness in the early afternoon. 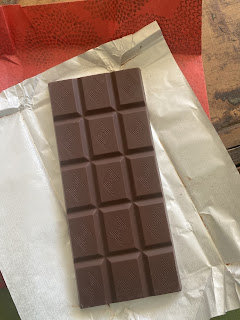 I suppose I'm rambling in order to say that while I use the word bitter, I would not call this a bitter bar of chocolate. It's rich and loamy, like what the trees were eating at the feast at the end of Prince Caspian (surely there are Narnia people still out there who get the reference, right?). That makes for a fascinating flavor: at once simple and chocolatey while also textured. Quite similar, then, to the effect I'd observed in Ritual's chocolate, as well, just stronger here because of the higher cocoa content. As for any more comparison between the two bars, I'd have to have them side by side or at least be looking at them with less time than nearly a year in between.