At first it just sounded like an interesting concept. Grass Fed Milk chocolate. I mean, when I buy beef, I buy grass fed--so why not include that as a marketing tag in chocolate, too? I wondered if it would be different in flavor from their regular milk chocolate. Making positive changes in ingredients is a good thing even if it doesn't noticeably affect flavor, but if flavor isn't noticeably changed then it might not be worth me doing a separate review, see? 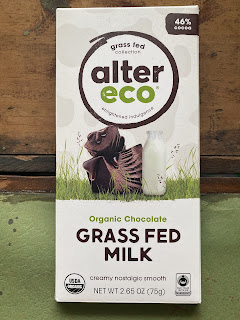 Then, though, I realized that I don't seem to have ever reviewed milk chocolate from Alter Eco. Which then caused me to realize that I don't remember ever seeing milk chocolate from them before. (If this seems unknowledgeable of me, remember that I've been reviewing chocolate for eleven years. That's a lot of chocolate to try and memorize.) Correct me if I'm wrong, but I do believe the Grass Fed Milk line is their first foray into milk chocolate (though one of their dark chocolates is 47% cocoa and this milk chocolate comes in at 46%, which is pretty close). That's exciting, then, the concept that they started off with just dark and now feel like they've found a comfortable way to approach milk.

And they who provide the milk are Swiss cows from open pastures in the Alpine Valleys. In case you were wondering. 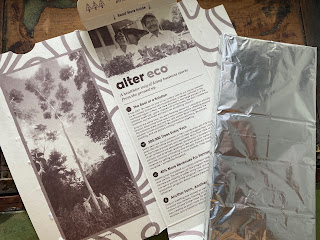 The aroma is certainly rich and milky, as you might expect from milk chocolate that is both Swiss and of a higher cocoa content. The flavor, though, has kind of a dulled out cocoa taste, almost watery. That is to say, it isn't as rich as I tend to expect from a darker milk chocolate. Yet it also isn't quite as sweet as I'd expected from the aroma. 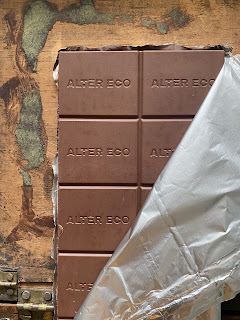 So what is it then if not chocolatey or sugary? Milky, I suppose. The mild dark chocolate flavor combined with this makes this chocolate bar not entirely unlike a scoop of chocolate ice cream. Which is not necessarily a bad thing, just not what I favor.

I do also notice a certain taste that makes me think of Hershey's, not so much a Hershey's bar but a Hershey's Kiss or something like that (the thickness makes a big difference for flavor). Along with the raw cane sugar, cocoa beans, cocoa butter, and whole milk, you will also find butterfat in the ingredients of this chocolate bar. And butterfat is of course something that Hershey's also uses. So perhaps it's that extra fatty milkiness that I'm tasting? Granted, it is better than a Hershey's bar. If you enjoy Hershey's, you'll probably quite like this one. The line at the bottom of the card box does after all, say "creamy nostalgic smooth." And Hershey's is nostalgic.

For myself, however, I'm less than thrilled about that association. Usually when I get a milk chocolate bar, I gobble it up much quicker than the dark chocolates. But this one has been sitting around for a few days without being attacked. Of course, Alter Eco still gets points for their positive values and ingredients and this chocolate is better than other fair trade milk chocolates on the market (am I pointing too closely at Equal Exchange?). It's worth trying out to see your personal opinion on it. But I'd much rather reach for something from Theo, for instance.
Posted by Deanna Skaggs at 11:01 AM