Happy Fourth of July, everyone.

In celebration, I thought I would give a nod to some ice cream in the form of the organic, vegan, gluten-free, fair trade Chocolate Fudge Pops from GoodPop. As I've mentioned, it's nice to see more types of products, not just chocolate bars, making an effort to join the fair trade movement. 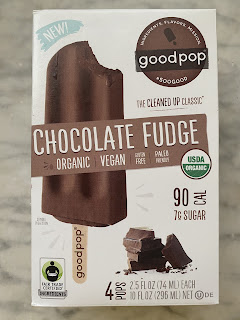 While I don't drink milk, I also don't buy ice cream very often, so when I do I've usually just been buying regular ice cream. I'm thinking now, though, to go back to the non-dairy options. That section of the store has changed, though, since I last took a good look at it. It used to be all about soy ice cream and now there seemed to hardly be any made with soy. It's all about the coconut cream now. And I'm not exactly thrilled about that. 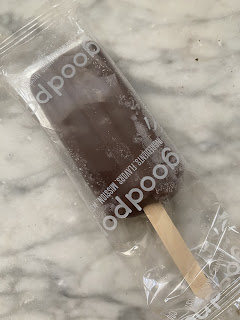 Everyone is choosing dairy alternatives for different reasons, so I can't generalize. But a percentage of people cutting out dairy might also be cutting out coconut cream (distinct from coconut water). And there is also the percentage of people who simply don't care for the taste of coconut, as I so emphasized in my review of the Charm School white chocolate a couple months ago. GoodPop does not use coconut cream in all of their products; it's only in the creamy, milky ones like the Chocolate Fudge, Coldbrew Latte, Orange N' Cream, or Strawberry Shortcake. So fruit pops like the Watermelon Agave or Cherry Limeade will still be clear of coconut. 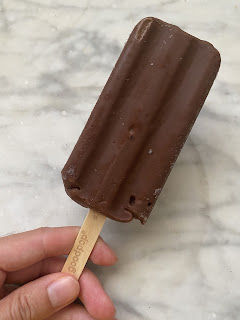 Does that brand still even exist that made those wonderful tofu fudge pops? Those were good, nothing "alternative" about them even to me as a ten-year-old. Anyways, these are a little different from standard, dairy fudge pops, but not too much. Yes, there is a light coconut flavor, but the chocolate is strong enough that the coconut sinks to the background. I probably would look to find another brand I could try next time, but if for some reason these were the only fudge pops I could have, I'd be okay with that.

They have a somewhat richer and darker color than is standard. They also seem to take a tad longer to thaw to a comfortable eating temperature and soft texture. I should mention, also, that the only sweetener here is coconut sugar. Given that the ingredients are all pretty minimal and of quality, the flavor here is good. Your focus goes to the chocolate, which is rich and creamy. And that's exactly what is called for in a summery indulgence.

So provided that you don't mind the inclusion of coconut cream, these chocolate pops are a nice non-dairy option. Now I think I will go continue celebrating by putting a patriotic hat on my bearded dragon.
Posted by Deanna Skaggs at 11:02 AM