Approximately ten years ago, the manuscript for Midnight Sun (you know, Twilight from Edward's perspective) was leaked online, so Stephenie Meyer chose to put it up for free on her website so that fans wouldn't get tempted to go look up the leaked copy. She always said that someday she would finish and publish it, someday when everyone had forgotten about it. And that time ended up being in 2020. Ten years ago, I would not have pictured putting on my mask before going into the store to get my copy of the book. But there you have it; you never know what the future holds--unless you're Alice, that is. 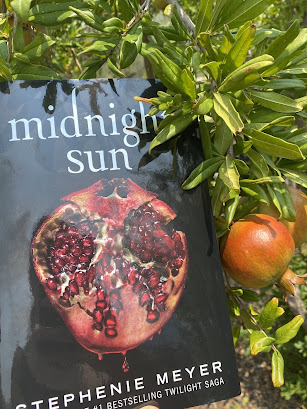 The first half of this book is of course quite familiar since it's material we've seen before. What does it feel like, then, to revisit something from your own past? Are we all still interested in what once held our attention. I can speak only for myself and I suppose the answer is mainly yes. Twilight was enjoyable because it portrayed the feeling of falling in love for the first time and Midnight Sun (particularly the first half) is the same way. All those little daily life flourishes and moments.

The thing is, though, back in 2008 in my senior year of high school when I first read these books I had never been in love. Reading about first love when it's something to look forward to versus when it is something in your past, something accompanied by first heartbreak, is something entirely different and much more painful. I found I could only handle small doses of reading. You could say that I wasn't as much into the fairy tale (which is not at all to say that I don't believe in love--but I do agree that fiction tends to overemphasize first love as the love).

I admit that I had forgotten that the leaked/originally-released manuscript was incomplete. At first I thought I was just reading scenes that had been extended since then (which I think was the case, too, right?), but then I of course eventually realized I was reading completely new sections of the book. While much of this book is fascinating to read because it does give you insight into what Edward was experiencing or why he acted a certain way at particular moments or how such and such unfolded that Bella didn't even know about, some of the material in here was superfluous. I really didn't need the extended dialogue of Edward asking Bella about her favorite movies and music and all that--yes, that's something you want to do when you're falling for someone in real life, but isn't something that added to the reading of their story.

By the time you're in the last third of this book, though, it shifts. This is the part of the story where Edward and Bella spend a lot of time apart, so you are seeing entirely different things than what you see in Twilight. Alice in action is great and their car stealing and freeway speeding was entertaining. And we finally got an explanation for why James only noticed Bella at the baseball game when the breeze went by; that always seemed like a plot inconsistency what with all the explanations about a vampire's sense of smell. And the last third was also great because I didn't have to sit through all the falling in love stuff anymore.

The Twilight series is well-arranged as far as the different stages of Bella (innocence, initiation, chaos, and resolution played out in four books). Edward's story plays out a little differently, though, especially because he has Alice showing him all of these possible versions of the story. That's why the first half or so of this book is his falling in love story. But after that, he's in a different headspace than Bella is. He's already planning to leave her life someday. So that's why Midnight Sun feels like two books or maybe one and a half books in one. His pacing is different from hers.

But that doesn't really matter, does it? This book is still nice to finally have. It was entertaining to run down memory lane and to get some new angles and scenes.

Have you read Midnight Sun yet? What did you think?

Posted by Deanna Skaggs at 8:35 PM