I don't get it. Compartes Chocolatier makes vegan, "superfood" chocolate and also makes chocolate bars with frosted animal cookies or Lucky Charms on them. You can choose to be plant-based or Red 40-based depending on your mood. I don't understand those two very different approaches coming from the same company. However, when you look at the fact that this is an LA company, it makes more sense: both vegan products and weird, for-photos, covered-in-cookies-or-cereal-or-giant-slices-of-cake products are very So Cal. While I can have some interest in some of either of those things, I really just want a good product. So I think I've done it once more: I bought a chocolate not designed for me at all. That is my warning that I will be more negative in this review than I generally like to be. 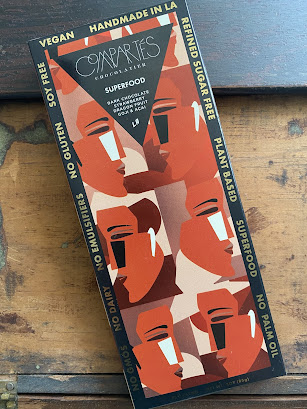 But I was curious. Of the three Compartes bars at World Market, I tried to choose the one with the flavors that would most appeal to me. The Superfood bar is dark chocolate with strawberry, dragon fruit, goji, and açaí. That is, I like strawberries and açaí juice and I think I've been neutral to my encounters with goji berries. Dragon fruit perhaps not so much, but then again I think I had a drink that was rather nice a few months ago that had dragon fruit in it . . . 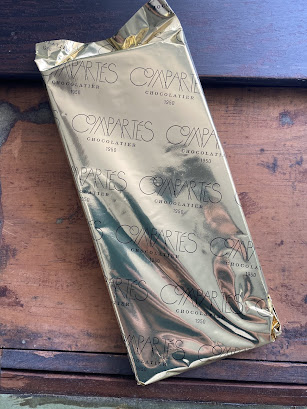 I'm not interested in all the labels that surround the card box. Why shouldn't a dark chocolate be vegan? That should just about go without saying. Same for gluten and dairy. And I would hope that small batch chocolate wouldn't have palm oil or GMOs. (Correct me if I'm wrong, but I can find nothing even on their website that says anything about fairly traded cocoa.) With so many labels, though, I guess I must've missed the one that mentioned the lack of refined sugar. Instead, this chocolate is sweetened with yes, you guessed it, coconut sugar. (I would prefer honey if they wanted to skip the sugar, but then I suppose it wouldn't be vegan.) Coconuts are haunting me these days, I tell you. Doesn't anyone realize that not only do I not like the taste of coconut, but coconut flesh (apart from coconut water) is on my list of foods to avoid? So this is not in fact a superfood for me. But coconut products are on trend right now, so here we are. 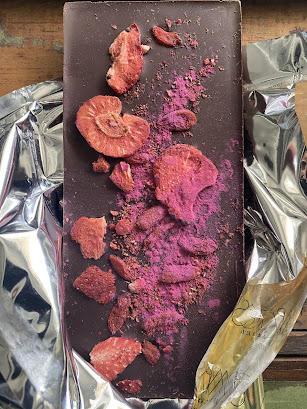 The more modern, geometric style of the packaging paired with the shiny, red coloring does not appeal to me. But it is unique and memorable, which are good things. The inner wrapper is much nicer to my eyes. The font paired with the simple gold background gives it a classy, Art Deco look. And the bar itself is gorgeous on both sides. On the chocolate, the geometric pattern of triangles has a simpler yet still unique appeal that I wasn't getting from the outside packaging. And the fruits and berries create colorful splashes on the flip side. 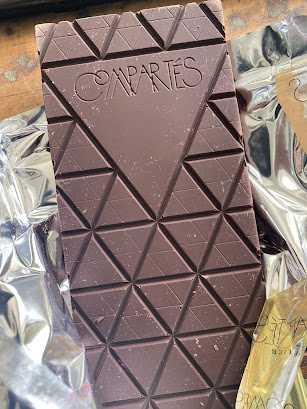 That almost neon, deep pink powder would be the dragon fruit. The strawberries are obvious. The goji berries are in there, too, though being smaller they stand out less. The açaí I don't know. They're pretty dark, so if there is açaí berry powder in here, it wouldn't be visible, right? 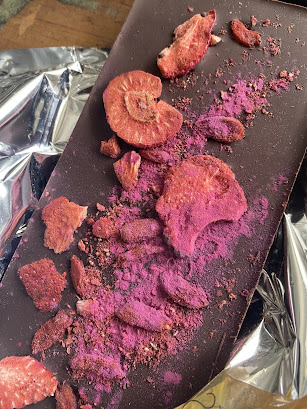 I began with tasting a corner of plain chocolate and found it not plain at all. That first taste had something of banana flavor notes, which was quite nice. Since then, I imagine I taste coconut more than banana. The chocolate is nice, neither bitter nor too sweet (it's a 75%), but it does have a certain taste to it, especially as an aftertaste, that won't appeal to those not fond of coconut. It isn't nearly so strong as in the white chocolate from Charm School, but still I provide the caution.

The strawberries are quite soft and squishy, a nice change from the usual freeze-dried strawberries. The goji berries I can't comment on because they're so covered in dragon fruit dust. And I'm not too fond of the flavor of that dust. It has a cool color and of course I like to speak of dragons, but I would have enjoyed this better without it. I haven't been able to detect the açaí, which figures since açaí already has rather a cocoa flavor to it, so it wouldn't probably stand out much in a bar of chocolate even without all of these other flavors.

When I first started eating this bar, I quite disliked it. Returning to it, I found it more edible and even somewhat nice. But I keep on getting that slightly bitter taste of the coconut and that slightly strange taste of the dragon fruit and those are not appealing. Again, I'll emphasize that I know that this chocolate was not made for me. So while there will be a percentage of people who agree with my opinions, I know there is also a percentage of people who will love this chocolate bar. And which category you are in is up to you.

Posted by Deanna Skaggs at 7:17 PM