Normally I'm not a big marshmallow fan. But I have learned that handmade or gourmet marshmallows are an entirely different species from the store-bought bags of questionable white sponges. And when I saw these Mexican Hot Chocolate marshmallows from Marshmallow MBA, how could I resist? An investigation was necessary. 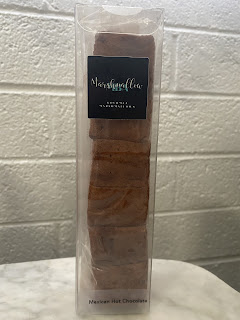 Marshmallow MBA is all the way out of Red Lion, Pennsylvania. Their founder makes marshmallows in continuance of the tradition she had with her grandmother. And their specialty is going for any flavor but vanilla. Hence the unusual Mexican Hot Chocolate--well, unusual for a marshmallow, that is. Even though there is a small company aspect to the simple packaging (the long clear box with sticker labels), the simplicity of the style also adds to the gourmet angle. These don't come across as cutesy, craft fair sweets. They look refined--which is why I was willing to pay a premium price to try them out. 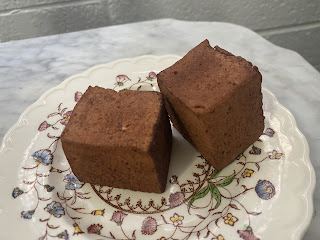 And even though there are only six marshmallows in the box, you're getting quite a bit of total product: these are big. They measure in at about 1.75'' by 1.5." There's a nice, warm, light cinnamon aroma once you open the sealed bag inside. The marshmallows are soft with that distinctive bounce. If I called grocery store marshmallows sponges, these are memory foam. As you can see, they have a brown color on the outside but are lighter on the inside when you cut them open. The original outer edges of the marshmallows are also darker than the other sides. That is, the sides of the original, giant piece of marshmallow before they were cut into individual marshmallows have more color. But they're also not shedding cinnamon powder. 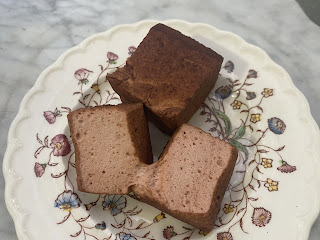 The marshmallows have a good flavor and texture on their own; the sugar tastes nice. Mexican-Hot-Chocolate-wise, they have that same warm cinnamon taste as in the aroma, just with a touch more of spice. And yes, it you have a nibble from the aforementioned outer edge versus a nibble from an originally inner edge, it will have more spice. It's enough on the outside to be mildly spicy, but still not so much as to be overwhelming. I was a little concerned about that. I don't care for chile chocolates that are straight-out spicy like a hot salsa, or so much so that you can't taste the chocolate. So these marshmallows, fortunately, are not like that. The spice feels more like an amping up of the cinnamon: it goes along with the sweetness rather than covering it up. It's like when a salted chocolate is salted to just that perfect level, just enough to give edge to the flavor. So unless you're very intolerant of any level of spiciness, I'm labeling this as a mild spice level. 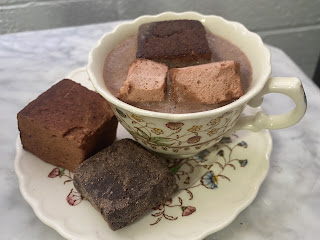 There is a touch of light chocolate flavor. Just a little. It's the brown color, the sweetness, and the cinnamon that probably lend as much idea of chocolate as does the inclusion of cocoa powder. It seemed quite natural to me to try one of these cinnamon chocolate marshmallows over hot chocolate. I just so happened to have some Mexican hot chocolate on hand, so I melted a chunk of that and topped it all off with pieces of a giant Mexican Hot Chocolate Marshmallow, along with another chunk of the hot chocolate on the saucer. I did receive good and well delight simply from looking upon the beauty. (Granted, it's also terrifying beauty to me--that's a lot of sugar all together on one little saucer.) The marshmallows stayed nice and firm on top instead of just melting right away. So they don't necessarily add a lot of flavor to the hot chocolate, given that they were mostly left at the bottom of the cup after the hot chocolate was gone. But they were still a fun addition.

Really, the possibilities are endless with something like this. They're nice to eat on their own. They're pretty in hot chocolate. S'mores would be fun to try. They're the type of thing you want to play with and try out in different ways and make into the center of attention. Not bad for a little, edible gift, either; we love the edible gifts, don't we? I probably won't be revisiting more of Marshmallow MBA's products on here given that they're marshmallows and my focus is chocolate. But I did enjoy this little investigation. I admit, if we're talking gourmet/handmade, I do begin to see the appeal in marshmallows.