This summer I took a look at two of the newish Cookie Bites from Theo. As I mentioned there, of the three flavors, the Snickerdoodle bites were the ones I had been most interested in trying back at their product launch. So even though I'd decided that this product wasn't really designed for me and my particular interests, I had to take one more look at the Snickerdoodles when they showed up on my store's shelves. 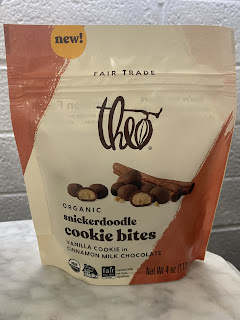 I do mean a brief look. The basic concept is the same here. The same style of packing continues, just with a warm, orange-brown color scheme instead of the cranberry and green. It's an easy choice to go along with the cinnamon sticks. The look is timely for me: it fits right in with the fall season of orange pumpkins and cinnamon-spiced everything. 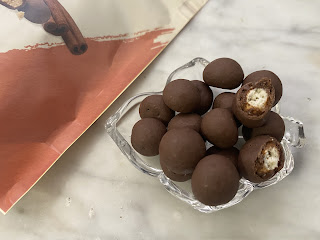 The cookie bites look the same as before, too, except that they're milk chocolate instead of dark. This is also what I was curious to try: Theo makes some of my favorite basic milk chocolate. The aroma is of super sweet milk chocolate, though the description says that this is their usual 45% milk chocolate. And it's also of strong, sweet cinnamon--much stronger than I would have expected.

There is a crisp crunch to the texture, perhaps a tad more than last time. I'm not tasting any of the cookie dough flavor that I mentioned with the others. What I do taste is some milk chocolate and full, sweet cinnamon flavor. Lots of it. Forget Snickerdoodles; these are cinnamon cookies. Add some ginger and cloves and they could be gingerbread. I don't exactly eat Snickerdoodle cookies regularly, so maybe I'm remembering wrong, but I don't remember them being this strongly cinnamon. They're mainly sugar cookies with a touch of cinnamon, right? I'm going to venture out and say that these cookie bites will be too strong for some people.

However. I don't mind the strong cinnamon. I add cinnamon (and ginger) to oatmeal every morning. When I make hot chocolate, I add cinnamon (often ginger, too). I like gingerbread cookies. I like chai. So I don't mind strong spices, and I know I'm not alone in that. Even though I've said that the strong cinnamon (which, again, is sweet and not spicy) will probably be off-putting for some palates, for me I find it endears me more to these cookie bites. Whereas before I felt like I just wasn't the right audience for this product, these I'm enjoying, in a casual sort of way. A little hint of milk chocolate, a crisp crunch, and warm cinnamon make for a pleasant fall sweet. They're halfway between a cookie and a piece of chocolate, and turns out that's not a bad place to be.