A Strange Garden of Pumpkins

A few years ago, I shared some daytime pictures of the Desert Botanical Garden's Halloween event, Strange Garden. They used to put up these wonderful pumpkin people displays. I would bypass the event and see the pumpkins during the day instead. This year, then, was the first year in which I went to Strange Garden itself. 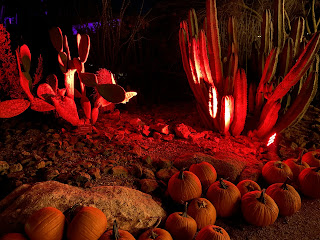 This year there were no pumpkin people. But there were various stations, child-focused, to show desert animals and funky cactus and magic and other Halloween-y curiosities. This is why a year or two ago they tried out doing an adult night: like with most Halloween events, there isn't much for adults. At least, not much besides the nighttime garden itself. And I do simply enjoy an excuse to get a little dressed up and wander around an event. 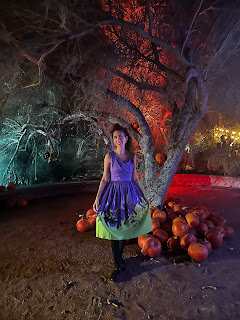 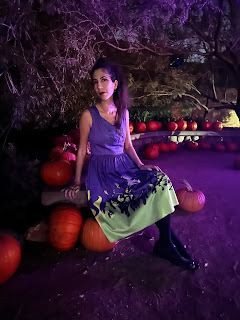 The familiar garden with fog? What a perfect time to play with taking spooky pictures. And the pumpkin patch, how pretty. Strange Garden's pumpkin patch is nice and clean and neat, with the pumpkins arranged all over the amphitheater area in rows and piles. I tried not to be envious of the children who could pick out a pumpkin to take home; instead, I consoled myself with taking lots of pictures of and with the pumpkins. 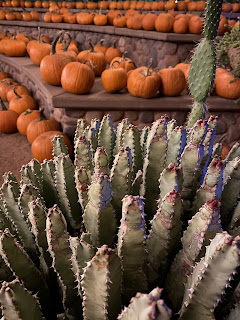 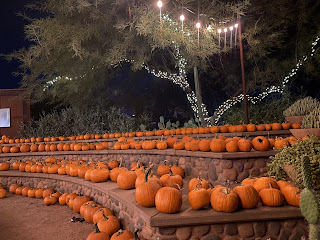 There is a novelty to taking pictures of pumpkins and cactus together. Maybe especially because I can go to the garden whenever I want--so any little embellishment to its usual state is entertaining. For people with kids, it's a less chaotic, more laid-back Halloween activity option--there's no candy, but at least they get a pumpkin. Maybe, too, it works that way for adults: you can dip your toe into a Halloween event, dress up a bit if you like, but not have to immerse yourself fully in crazy crowds.
Posted by Deanna Skaggs at 12:17 PM