A while back, I posted my thoughts on Gayle Forman's If I Stay; you can read that post here. As you can see, I very much enjoyed that book. When I heard, however, about its sequel, I wasn't sure what to think. If I Stay just doesn't seem like a book that can have a sequel: the point about it was encapsulated in one moment in time.


But I was underestimating an author I had enjoyed. (Light spoilers below, I suppose.) 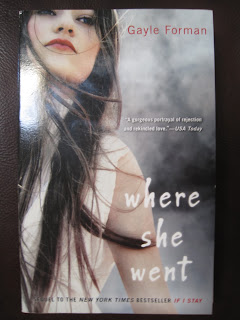 While If I Stay is from Mia's perspective but is very much about her loved ones and her relationships with them, Where She Went is from Adam's perspective but is very much about Mia and their relationship. In the first chapter or so, I wasn't too keen on the perspective change. But it works out wonderfully: it allows the sequel to do the same thing that the original did without repeating itself. Like its predecessor, Where She Went is heartbreaking, sweet, tragic, raw, and lovely. It, too, is about a single moment, but a moment influenced by other moments and that also will influence future moments.

I suppose you could call it sentiment, but that doesn't sound quite right. I was one of the few people on the planet who thought The Notebook was a boring movie (maybe not boring: it just didn't affect me). So it isn't so much sentiment, but emotion brought out into center stage. I'll also say that this book was one of the cases where a present tense narrative worked: sometimes I even forgot that it was present tense (as opposed to some other books where the tense might just drag the pace down into slowness).

There is a reason I haven't said much about plot: summarizing would just remove the elements from how they exist in the book. I don't want to do that: they're quite comfortable where they are. It's hard to look at just one element when they're all part of a whole.

So, yes, Gayle Forman managed to put together a sequel that did justice to the first book I enjoyed. If you read If I Stay but haven't gotten around to this one yet, you must.
Posted by Deanna Skaggs at 9:53 AM

Labels: Gayle Forman, If I Stay, Where She Went