Harken to This Tale

Why, you ask, after talking so much about Harken before the book came out, do I suddenly go quiet when it is finally released? The reason is that I can promote a book I haven't read before it's out, but once it becomes available, I feel that I have to have read it to say anything more. 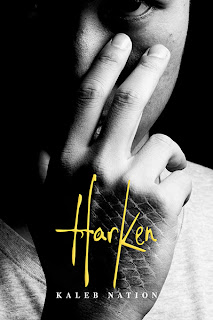 But one week has given me time to read in the morning over breakfast, in the evening over dinner, and sometimes during commuting. In a way, I think it's better that I didn't zoom through the book. One thing I must say: you know by now that I vastly prefer (personally--I'm not making a statement about which is better) hard copies of books and Harken is only out as an ebook for now. So I read it with the Kindle Cloud Reader, sometimes on my laptop and sometimes on my phone. It being my first time using it, Kindle's reader was surprisingly good, but I still feel like I would have a better grasp on this book if I had a solid copy of it to flip through. When it does come out as a physical book, you can be sure I'll get it right away.

Anyway. This was an intriguing, entertaining read. In comparison to the Bran Hambric books, Harken is more serious and more edgy. It isn't without smiles, but it contains a great deal more of the tear-type. A touch of mystery, a good smattering of thrills, and the warmth of human affection make up its main parts. That's one of the things I find myself enjoying about Kaleb Nation's books: the idea of family that is within them, in one way or another.

Given that I make inevitable comparisons between stories, Harken reminded me of four things. Villette by Charlotte Bronte for the themes of identity (sorry: this is one of the books I have my head buried in right now for my honors thesis). Battlestar Galactica for much the same reason, along with others that will be obvious for anyone familiar with the series (it's because I'm finally getting close to finishing this show right now). This book called The Outsiders that I read in sixth grade and really liked; the comparison has to do with the characters and the colliding of worlds, so to speak. And The Host, also for reasons obvious. Well, Michael also reminded me of Peter Pan at one or two moments, but that may be too random (or not?).

I'm not really going to talk about the plot, at least for now. I feel like this story is still new enough (and not yet finished, since there are at least two more books to follow) that I can leave that for later. What I will say is that Harken is driven by characters, characters relatable because of their fears and worries and failures but also because of their hopes for success and love for each other. It's the goodness, despite all the tragedy that is in this book, that drives it ultimately. That's what make this book compelling.

Oh, yes, and I've updated my Kaleb Nation tote. Yes, that's his signature on it from the book tour for Bran Hambric: The Specter Key. 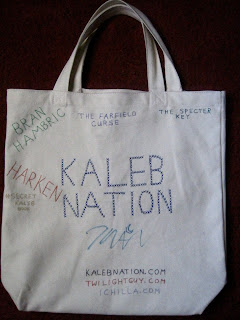 As you can see, I added an homage to Harken's early days before we knew the title and word was spread for the book using #Secret Kaleb Book. Goodness, how perfect were the marketing strategies for this book given its plot . . . 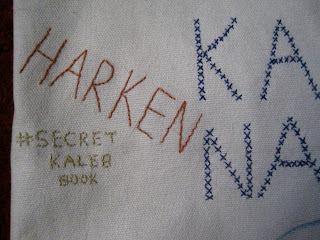