Beauty and the Beast in Front of Me

Before I graduate, there are some things I've been making sure I do or see on campus that I just never got around to before.  One thing I had never done was to go inside of the ASU Gammage auditorium, even though The Phantom of the Opera was there a couple years ago and I really should have found a way to make it to that.

So when I learned that Beauty and the Beast was doing a couple of performances this month, I said, hello, more perfect timing, and made sure not to miss it. I've probably said this before, but despite enjoying seeing live things like this, I hardly see any at all. In fact, I think this was my first "real musical," which means I'm not counting any for-children productions I may have seen when I was younger. 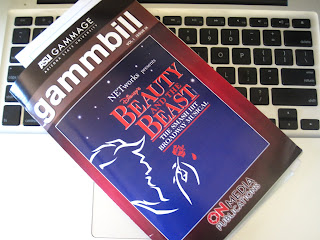 One of the things I really enjoyed was seeing how quickly and seamlessly they turned the sets around. There is fluidity to the choreography not just of the actors but of everything on the stage. The castle set/lighting was properly creepy and all the lights and glimmer during "Be Our Guest" were as expansive and shiny as it gets. I was only disappointed by the library: although the arch of tumbling, oversized books they used fit into the set's permanent arches, I would have preferred to see an arch of shelves. The library is so huge and beautiful in the movie that I wanted to see something more similar to that instead of an abstract "books" image.

While I never felt that William A. Martin as Maurice showed enough emotion in his dialogue, Joe Hager gave a great performance as Gaston, really playing with the character. Given that this musical is almost double the length of the movie, they take more time for some of the character developments. We see more, particularly, of the servants and also more tidbits of scenes in general. While not all of the added songs interested me much, some did add a deeper angle or more development. One of these was at the end of Act I; I think it was "If I Can't Love Her."

Although I think I would utterly suffocate in New York having Central Park as the only echo of "nature" including the sky, it would also be nice to always have so many productions to go see. Then again, I'm always talking about how Phoenix does have plenty of things play during the year--I just usually don't get to see them. Maybe I'll come back in February for Andrew Lloyd Webber's The Wizard of Oz?
Posted by Deanna Skaggs at 1:02 PM

Labels: Beauty and the Beast, musical