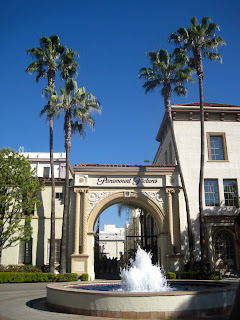 Having lived, mostly, in Southern California until I was seven or eight, things like the Hollywood sign were normal and everyday for me. I never had that awe for Hollywood, Beverly Hills, or L.A. because it all just seemed part of the close-by world. But that isn't to say that, even now, I have seen everything there is to see in this the land where movies are made.

Over Spring Break, there was one particular day devoted to the studio experience. In the morning, we took the two hour tour of Paramount Studios (there is also a longer, pricier tour). Our tour had eight people, so you really have the chance to ask any questions you have or get to see particular buildings that interest you. We went inside the theatre where they screen movies, one or two TV sets, and inside one of the "false" buildings on the backlot. While Universal Studios lets you take a tram through the street sets, here we got to walk around and really take a look at how they can arrange the streets differently depending on what they're shooting there. The building we went into was bare except for wires, wires everywhere. It feels so different to be told that something is a set, versus to walk around in it and realize that, as real as it looks, it is all fake. It's like a giant set of toys. (Which I say with excitement and admiration, not disdain.)

After lunch in West Hollywood, we parked at The Grove and lined up outside of CBS for a taping of The Late Late Show (with Craig Ferguson). While this probably wouldn't have been on my agenda, this was the first time I had been in a studio audience. I happened to be sitting on one of the edges, so I could see behind one of the set's side walls--you know, "behind the scenes." Simply for the experience of it, I was glad I tagged along to the show.

Oh, yes, and the day before, I decided to take a picture of the Hollywood sign for the first time--I had seen it so much before that I never even considered photographing it. In doing so, I learned something: that's a hard sign to photograph what with all the glare and my nonexistent camera skills. 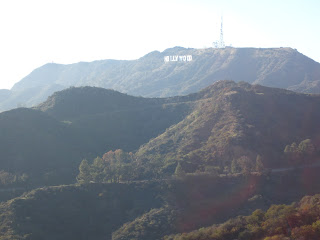