1) Black Cameo - This little present came from an antique store in California. In addition to being a cameo, it's also a locket. While I already have one cameo, that one is edged in gold and has traditional coloring. I find that the black and silver of this one give it an edge that goes well with multiple outfits; it's girly and vintage because it's a cameo, but it's less sweet than if it were in pink and gold. I've worn it more often than not in the last week. 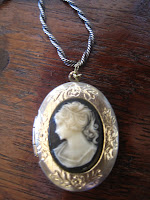 2) Peacock Pencil Box - This box is far from new; I got it at Papyrus at least four years ago. The wood is dark and smooth, and the painted peacock bright and silly. It's been sitting on my desk all through college, holding onto a bunch of colored pens and highlighters for me. 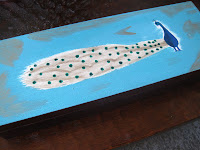 3) Red Leather Watch - My purple watch betrayed me back in January, falling off my wrist without me noticing. I haven't been sure since then whether or not to replace it, or whether if I did replace it I ought to invest a few more dollars and get something nicer. But I got another World Market one last week. It is leather this time, though. And it has a buckle so it won't fall off. 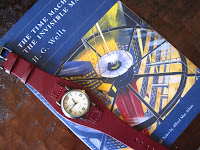 4) Irish Breakfast Tea - Last month around St. Patrick's Day, I kind of wanted some sort of food item for the holiday. There wasn't much to chose from. But I did get this tea at Trader Joe's (I think it was $3, for 80 tea bags). Although I usually like my tea dark (and without anything added to it), this tea is quite dark. So I figured out that, instead of brewing it for as short a time as possible, it's better to let it brew really dark and then add a little almond milk--as Liz Curtis Higgs suggests in My Heart's in the Lowlands. Given that I've gotten bored of coffee again, this has been my morning drink lately. 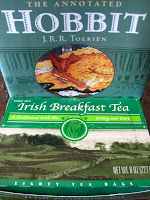 5) Rings - They say that, with how much we use our hands for laptops, smartphones, etc., bracelets and rings are must-have accessories. Perhaps so. Most days I have been wearing two rings--I never wear more than that. These are some of my favorites: 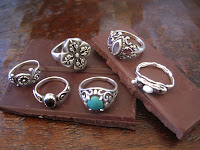 6) Green Bowl - My green glasses, tea cup, to go cup, and pasta strainer weren't enough. As such, I have finally acquired a bowl from Anthropologie. Yes, just one: that's all I need right now. It is green. 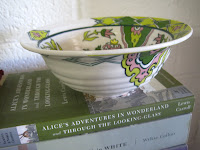 7) Brown Bebe Shorts - Ah, summer is upon us. I think I have now worn pants for the last time until October, possibly September. Capris and dresses are also very well, but here are some shorts also. I may not have actually bought them at Bebe. I'm not always a big fan of Bebe's style, anyway, but these shorts fit, the material is durable, and the brown fabric with light polka dots is styled but also plain enough to be a basic. 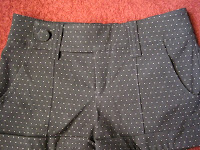 8) Cat Calendar - Since I'm sharing things that hang out around my desk, here is my calendar. I got it at the famous Changing Hands bookstore, which I guessed (correctly) would have a more unique selection of calendars. I'm not a cat lady; I just thought the look of these images (vintage cat posters) was close enough to my style to work on my wall. I use my iPhone's calendar, but the visual just isn't the same. I like to look up and see the month in front of me. 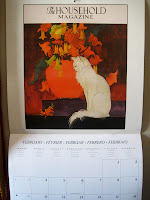 9) Flower Sandals - Phoenix has now reached 100 degrees for the first time this year; from here, the city will spiral into temperatures of doom. Since not even flats are bearable when it's 110 or even 114 outside, here are the new sandals I have picked up. The brand isn't special, but the flowers are leather. Since the color is neutral (less gray than they look in the picture), I'll be wearing them with everything. 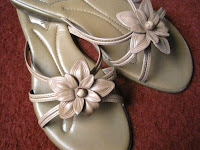 10) Final Preparations - I was just looking for an excuse to show my graduation announcements. Most often, I tell people that the idea of graduation hasn't really hit me yet, and it hasn't. But when I look at things like this, I do start to feel a little proud and excited. 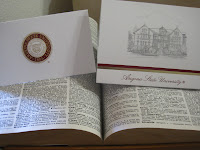 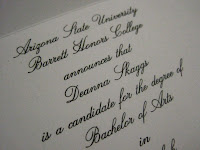 Posted by Deanna Skaggs at 6:18 PM