Sorry, I've been tired lately, so every spare moment has been taken up in sleepily watching Lost (this, I might add, is my first time moving through the series). If this post is more delirious than usual, that is probably why. I just got this random idea to pair makeup and books, and so here it is. Note that I only used fiction and I only used a few makeup essentials, not every single thing I own. If I had my whole library with me, the pairings probably would have been different. But here is what I came up with based on what I have right now.

1) These are the lesser noticed base, the things that you yourself love but that are harder to talk about with others unless in very specific situations. Jane Eyre has become a part of who I am because I read it at a fairly young age, connected with it, and continue to revisit it and reconnect with it; but I usually only talk about it at length in literary contexts. Like this is my moisturizer, Tarte's Maracuja Oil; I love it dearly, but I only even found out how to pronounce its name after several months. My Rose Petal and Witch Hazel toner from Thayer's is wonderful, but who wants to hear about a random product like that unless in a serious hippie beauty guru conversation? 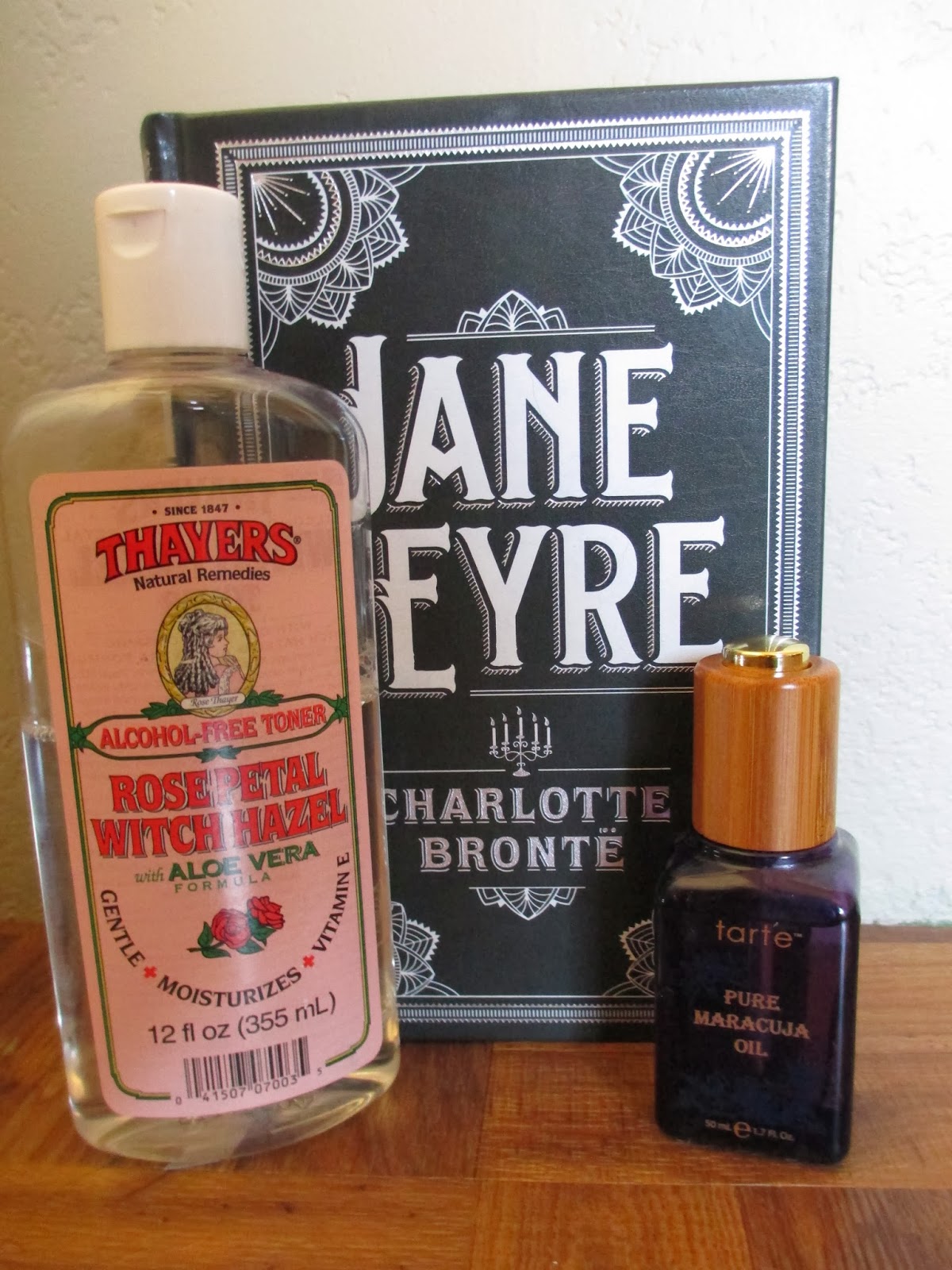 2) Now here is the foundation. The literal foundation is a mineral powder from Merle Norman. I have had this very container for at least six or seven years; the words are nearly all worn away. Since I use very little of it, it suits me perfectly. Likewise a part of my daily life is The Lord of the Rings. This book contains ideas that are the foundation of many things fictional, fantastical, theoretical, and even ethical. No matter what topic you're going over, you can probably bring some Tolkien in for analogies or examples. 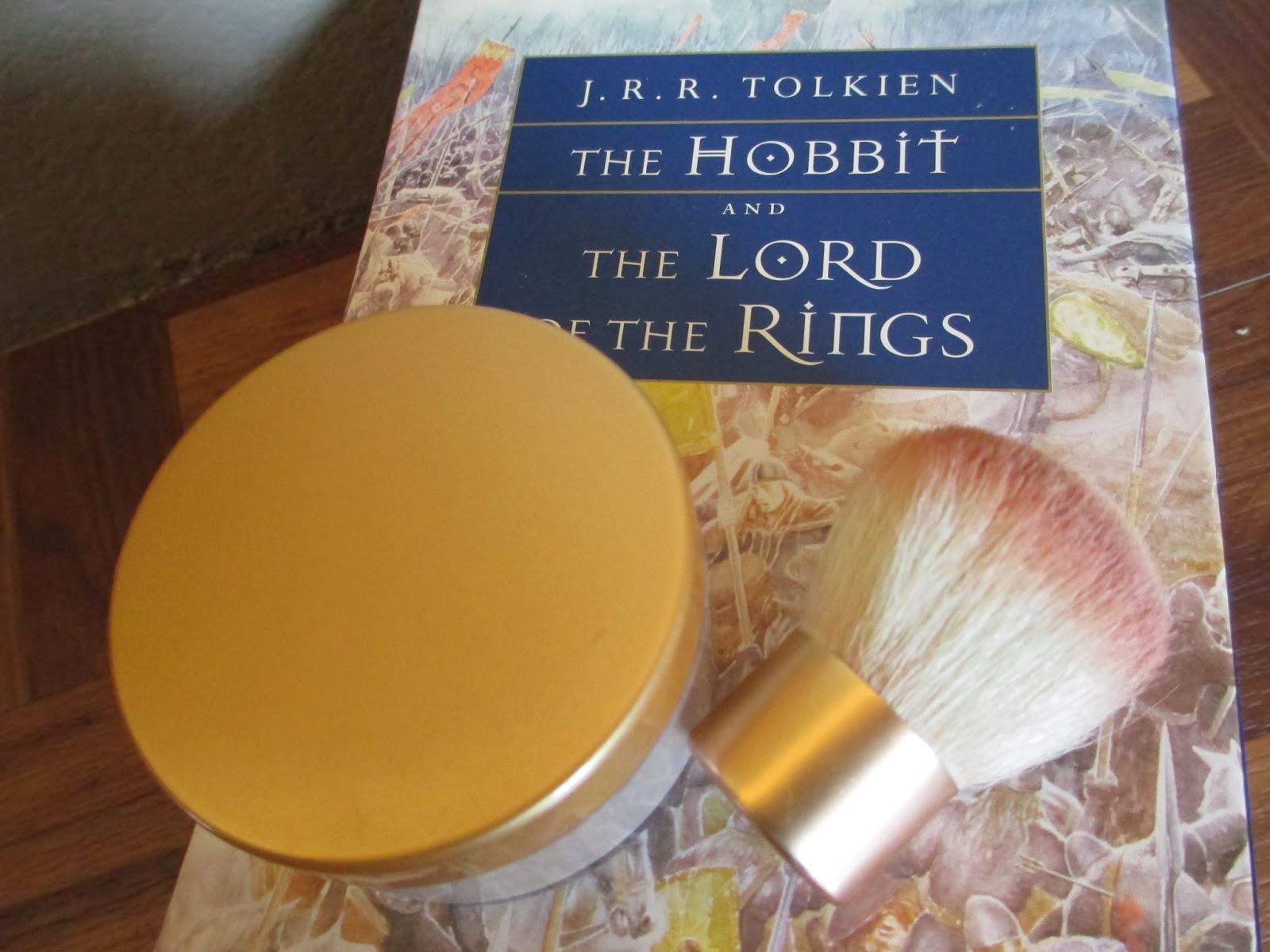 3) I interpreted blush as the soft warmth that affects the overall look. My usual blush is a tiny circle of Adventurous from Tarte; even though it was a small size included in a set, it's lasted me a long time because I only wear a touch of blush. I'm having Grace in Thine Eyes stand in for Liz Curtis Higgs; her books also have a warmth to them and there was a time when I would have easily named her as one of my favorite authors. Warmth, but also a bit of boldness. 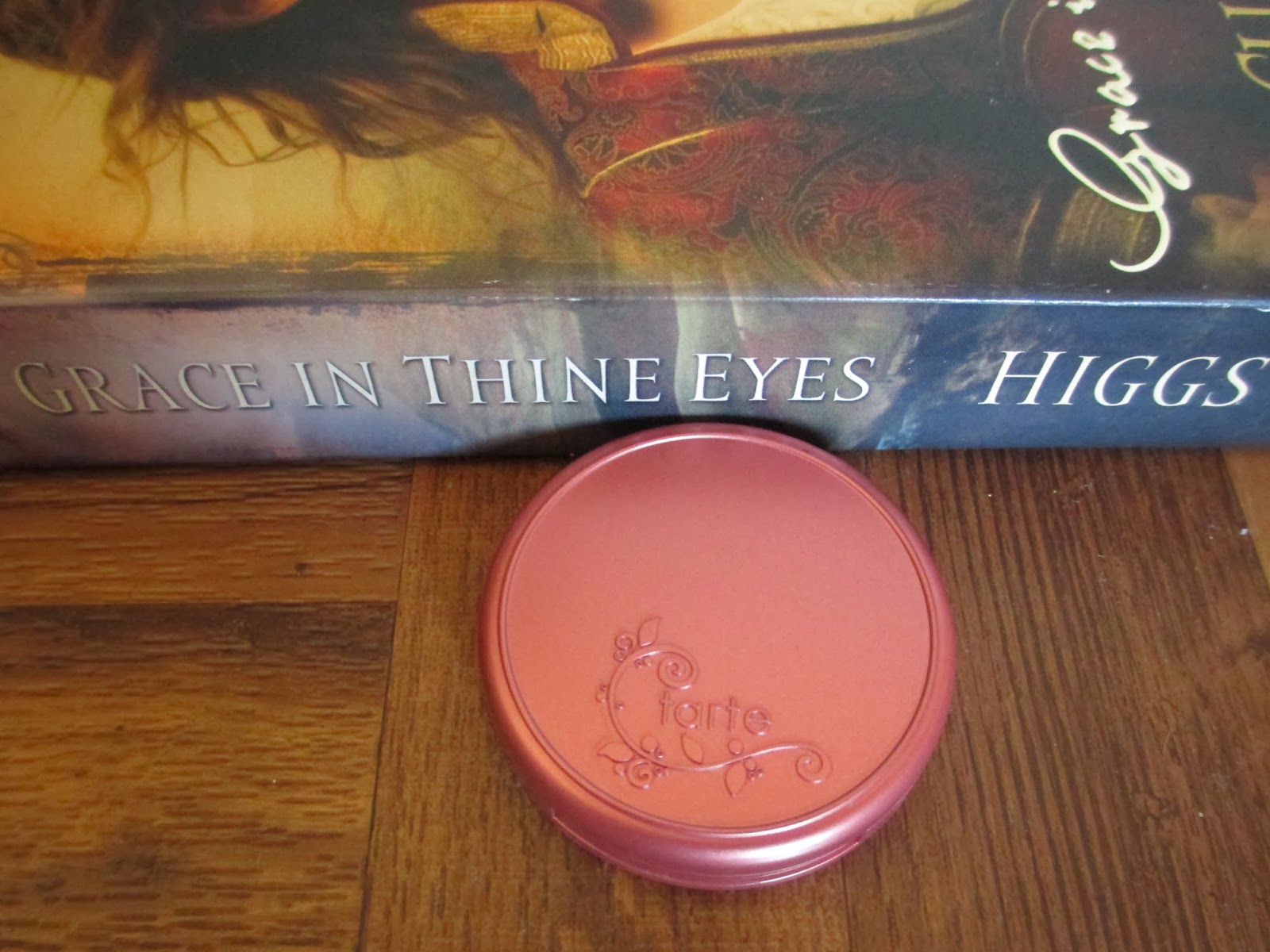 4) Much more bold is eyeliner territory. This is where dark black stands in stark contrast to the rest: if you take out this one element, its absence is gapingly visible. I use Tarte's Skinny SmolderEyes in Onyx for below the eye and their MultiplEye Liquid Eyeliner for the top. With them I paired Ender's Game: its dark, sci-fi cover stood out when I read it this last summer, but then I ended up really enjoying the book for itself and for what it brought to my collective literary experience. 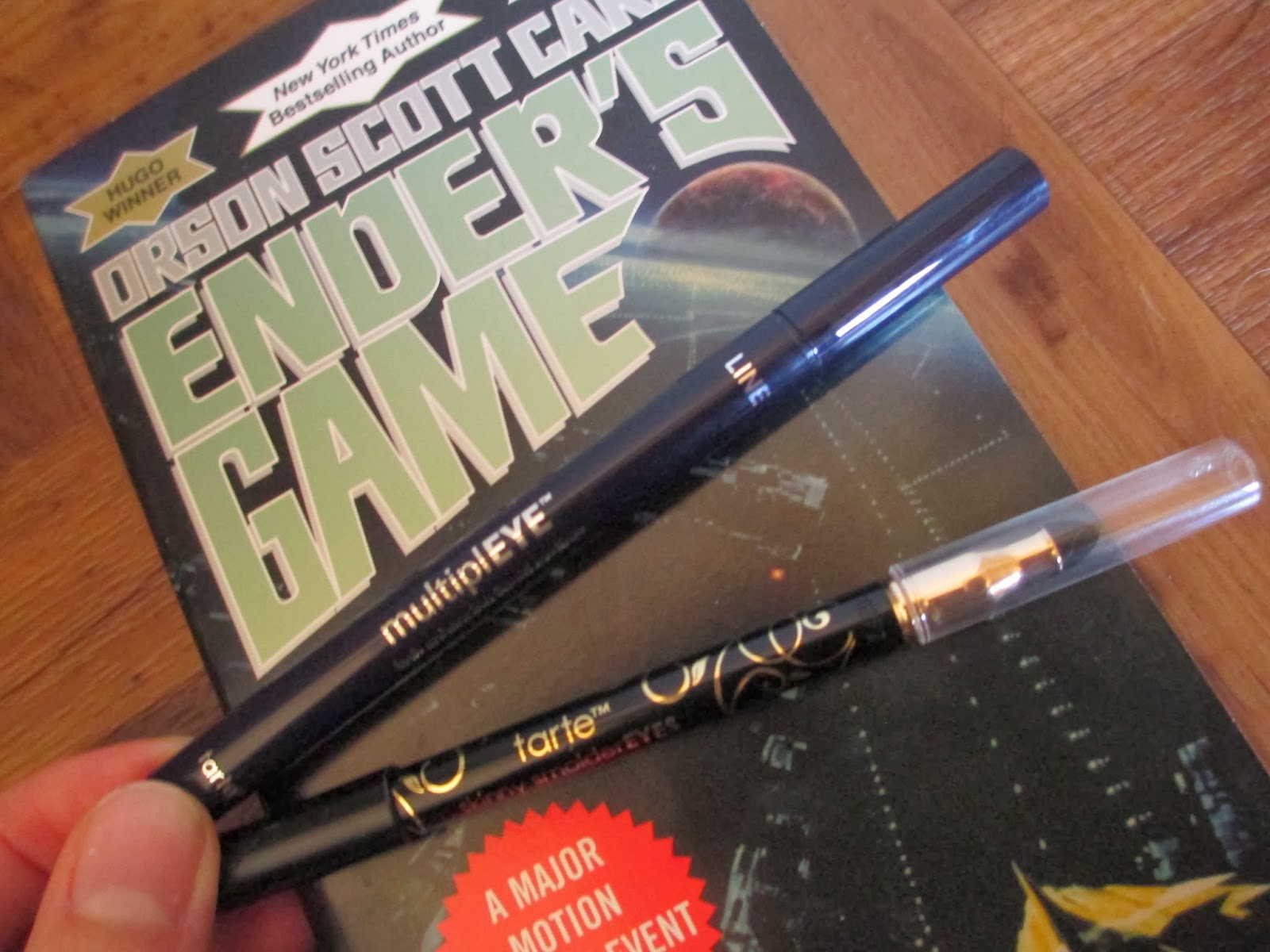 5) Eyeshadow is the fun part, the crazy part, the colorful part. Sometimes I use more muted colors, but sometimes I might go for green or black or purple. It isn't necessary, but it makes everything lighter and more entertaining; it isn't for anyone else. It's just for me. So with Tarte's eye primer and Beauty & the Box set in Brewed Awakening, I've placed A Series of Unfortunate Events. Basically I was going for the children's stories that we love also as adults, not just as children. The stories that will always make us smile. 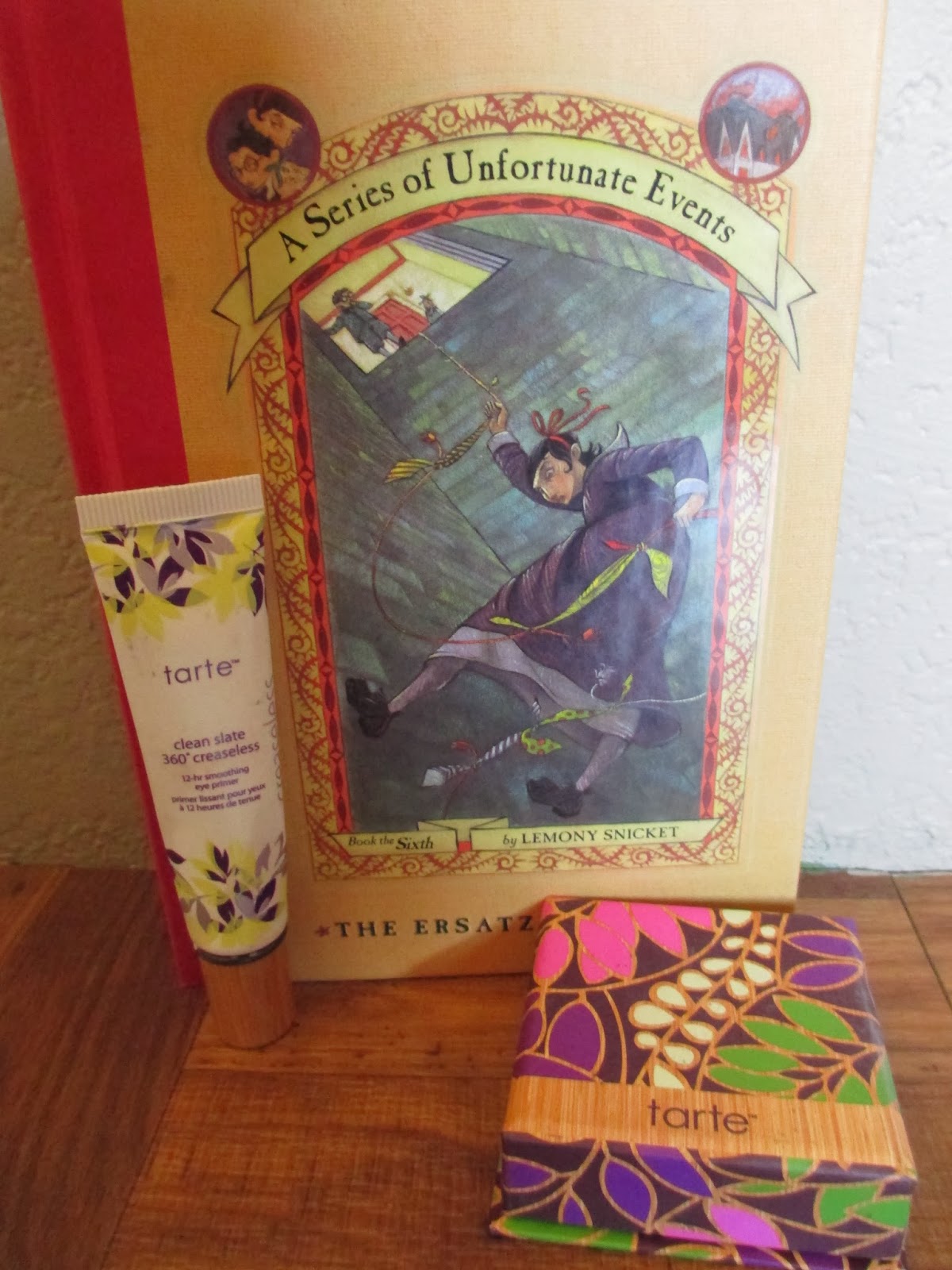 6) Mascara, mascara, mascara--what is mascara? Depending on how you use it, it might just be an accent for your eyes or it might be a more pronounced blackness. Since I have long and full lashes to start with, I went for the more pronounced concept. Tarte's Lights, Camera, Flashes mascara and eyelash curler stand out in boldness against the cover of the much-talked-about Wuthering Heights. This is the book that is frightening in its boldness, the book that's been interpreted in a hundred different ways, the book that is very simple yet also somehow rather complicated. Either way you look at it, you can't ignore it. That sounds like mascara. 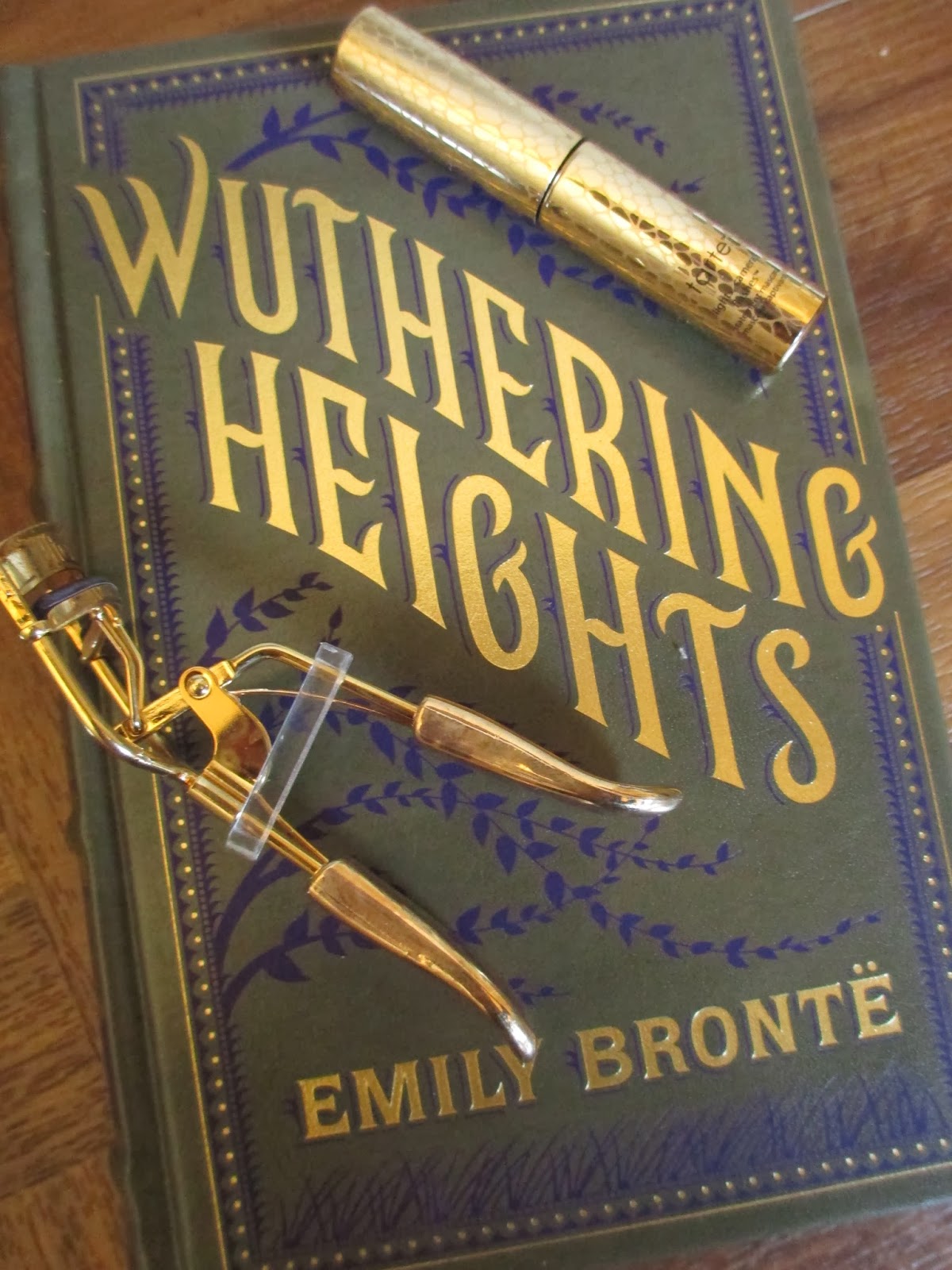 Posted by Deanna Skaggs at 1:10 PM