At Kingston's Candy Co. in Ojai, where I found the Twenty-Four Blackbirds chocolate bar I enjoyed so much, I also came across some even more local findings. Ojai Chocolat, as you can tell, is straight from Ojai. While the packaging isn't particularly interesting, I was drawn in by the pattern of lavender that is on the chocolate. It has so much texture to it that it evokes both an organic, handmade look and grander artistry. I guess that made it worth my seven dollars. 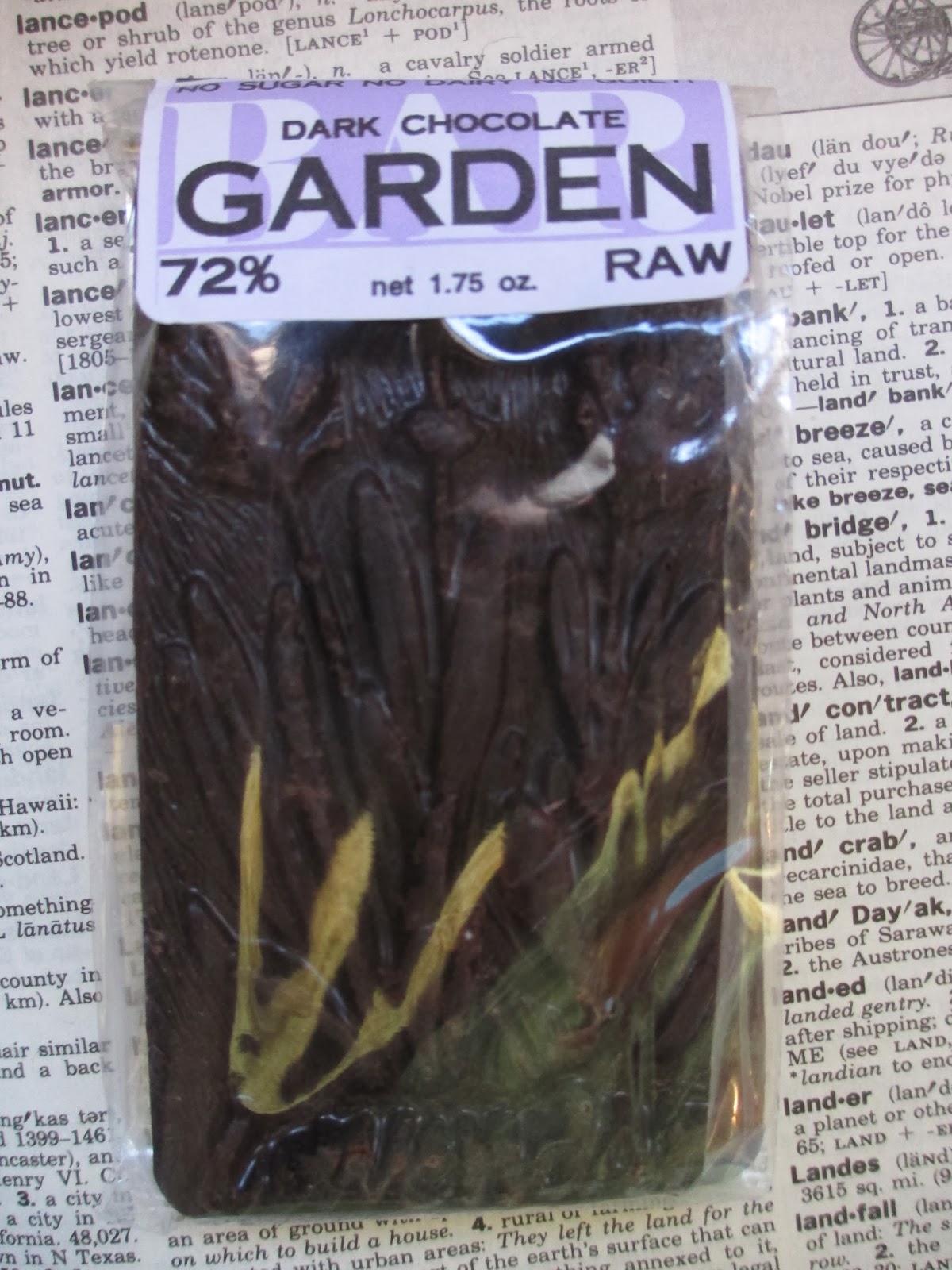 As described in the video interview on their website, this little company uses fair trade, organic cocoa beans that are not roasted; because all the temperatures are also kept under 150 degrees, this is also raw chocolate. But I've tasted chocolate that's kept under much lower temperatures than that--so I don't consider this "highly raw" chocolate. And however a chocolate arrives at the final product, I want that final product to taste good. Otherwise why bother? But there is a concept of healthfulness to this company, as you can see from the "no sugar, no dairy, no guilt" declarations on the label. The sweetener, by the way, is blue agave. I get all of this; I do. I just am always cautious that the declarations will overpower the quality of the product. 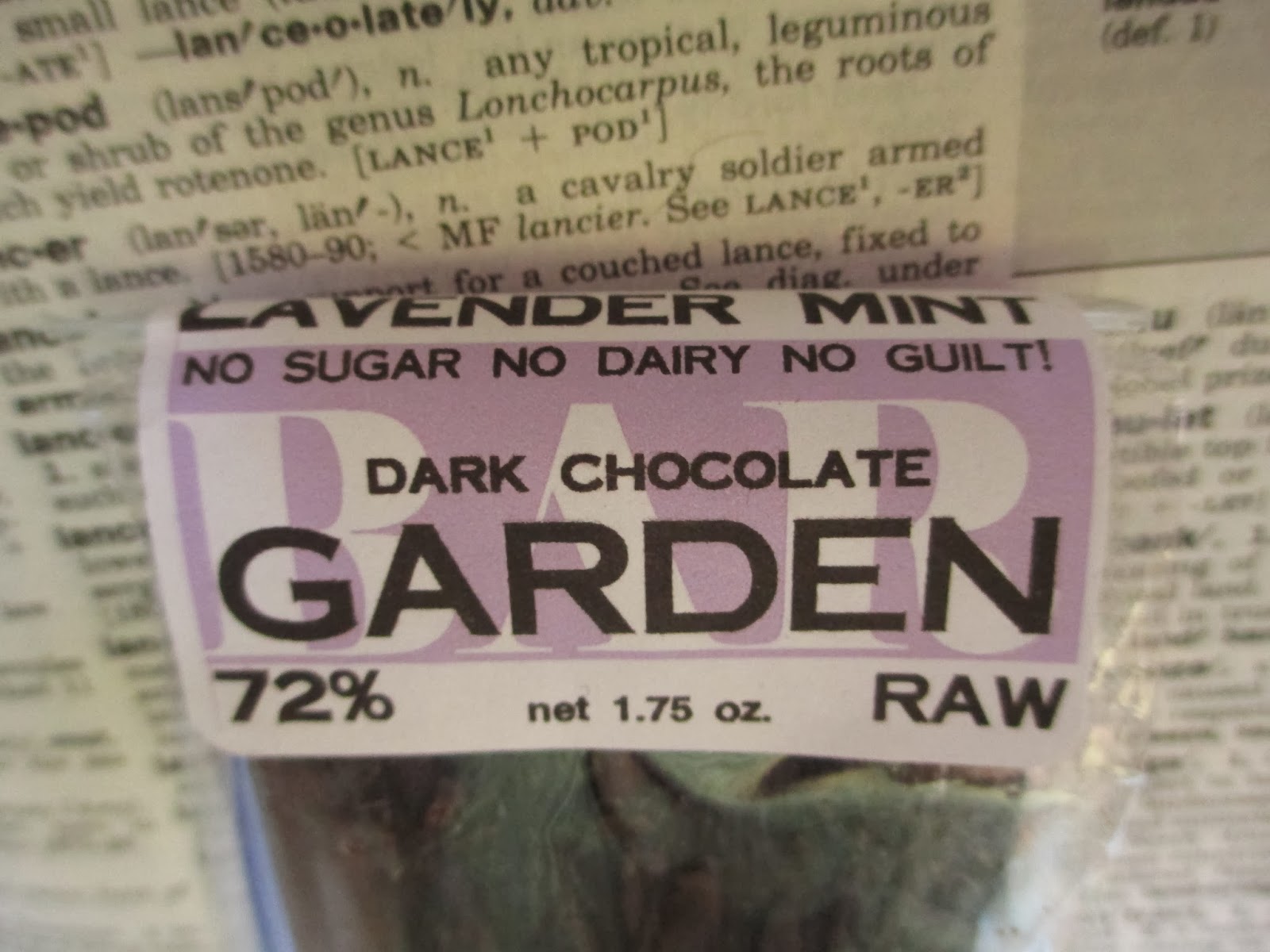 Given, however, that this is such a beautiful chocolate, I don't think that that overpowering really happens here. Look at that glossy face. I don't feel like I'm looking at a bar of chocolate; I feel like it's a carefully crafted and carved wooden tile, stained to a dark glow. It's gorgeous. And as soon as you open the clear wrap, out comes the Lavender Mint scent. If I've had lavender and mint in chocolate together before, I don't remember the experience, but I find that the two harmonize quite well. Lavender already has a tang like mint does, so they make sense together. And while mint is a very common flavor for chocolate, lavender is still a bit less average. Both the lavender and peppermint come from essential oils, hence their powerful aroma. 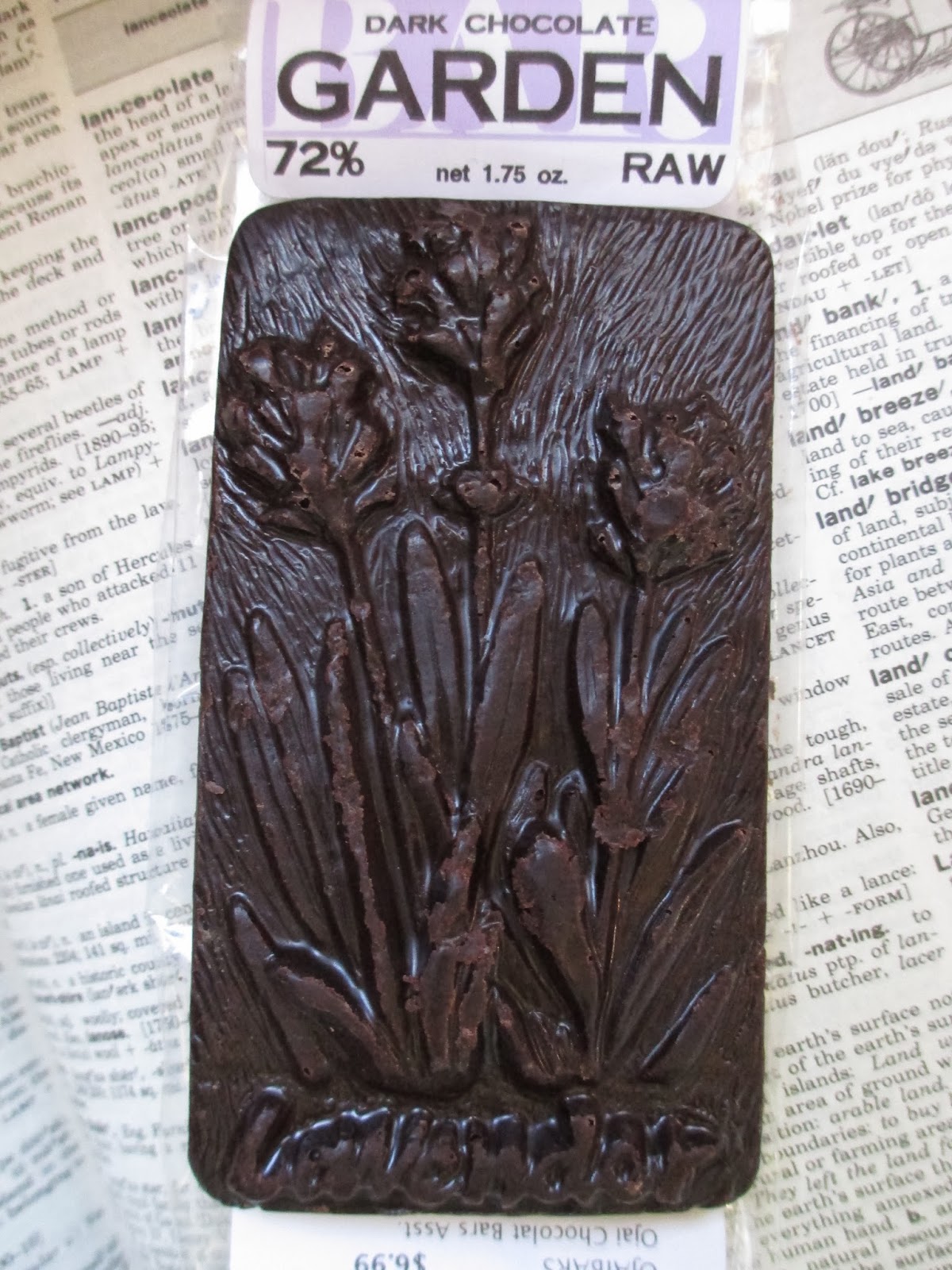 I started nibbling on the chocolate before learning about the 150 degree thing. Yet right away, I could tell that this chocolate was heated more than some that I've tasted. The texture, certainly, is different from regular chocolate, but it's still fairly cohesive and isn't crumbly or grainy. It's almost like very stiff fudge. So it doesn't melt as easily in your mouth as chocolate usually does; that's why nibbling on it is the best way to eat it, I think. Although at only 72% cocoa, it's quite dark and rich. I don't mean that it tastes bitter. On the contrary, the sweetener and the lavender and mint mask any bitterness that the chocolate may have had. But you only have to eat a little before you start getting a strong chocolate hit. If you want to start bouncing around the house, that's cool. Otherwise, you might like to saver this bar slowly. 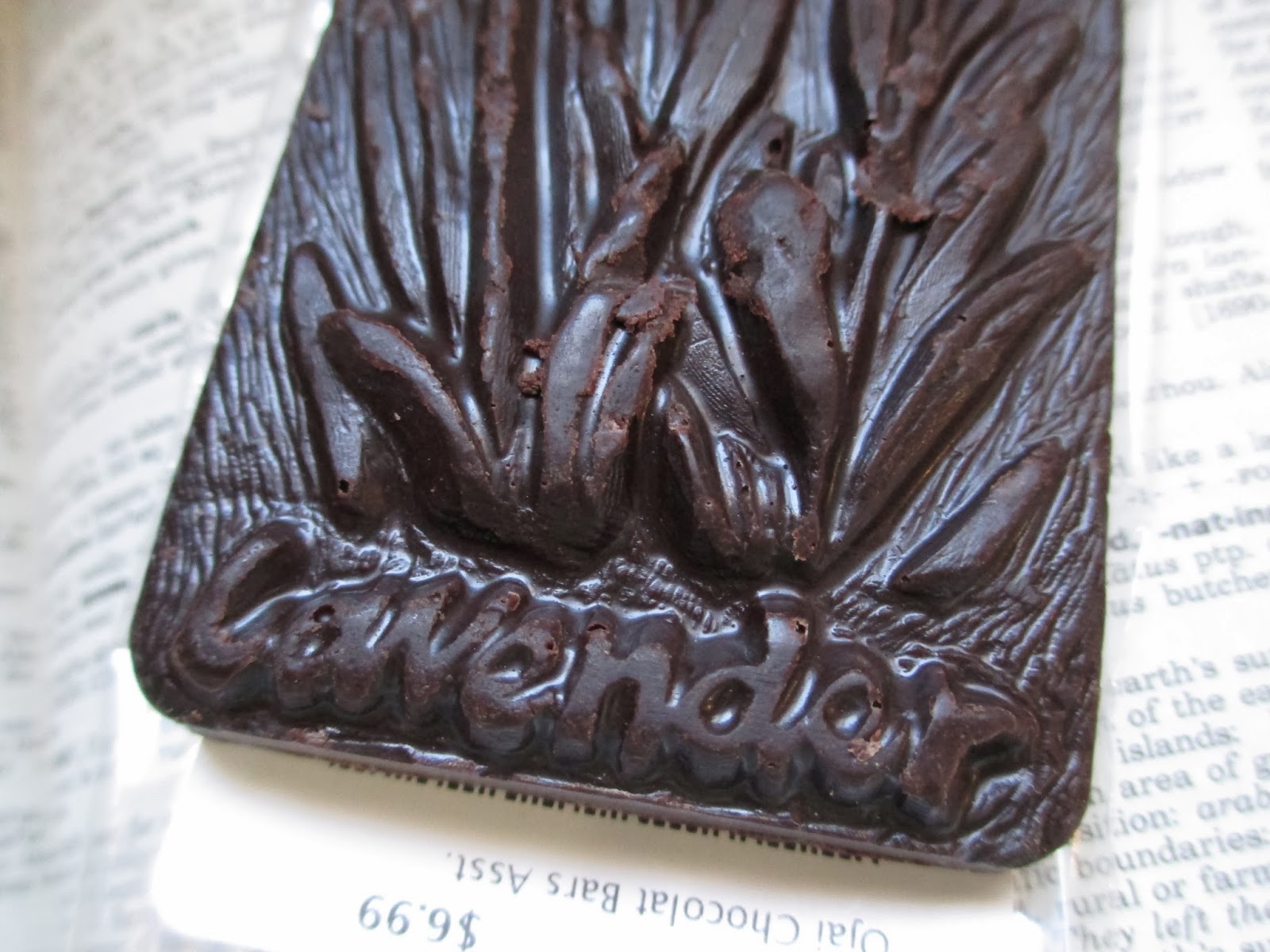 Raw factor aside (since it really isn't handled in a way that should scare you away with foreignness), this is nice chocolate. It has sort of an adult sweetness to it. It's the lavender and mint, I think, and the fact that the chocolate doesn't taste bitter. Given, this is still dark chocolate. So I'll let you decide whether or not it might be something you would find too dark. For me, it was at just the right level. 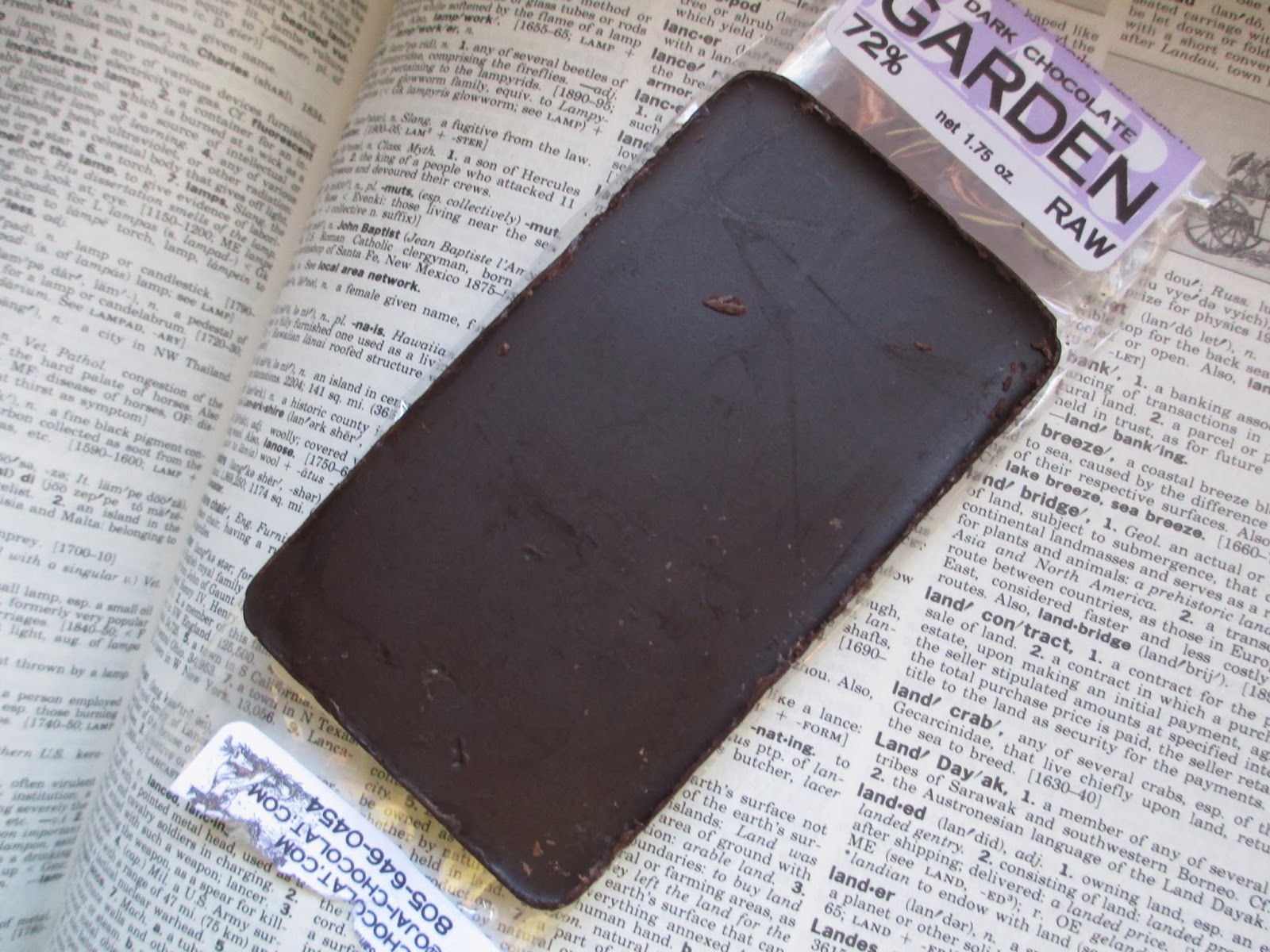 Just take one last look at the back of the bar. Isn't it smooth? For something that's taken care to be raw, that's very smooth and pretty. So if you do like the standards of raw and no sugar and whatnot that Ojai Chocolat stands for, this is a good company to try out. And if you're simply searching for good chocolate, this is also a good product to explore. I would still tweak the packaging and labeling, but the chocolate itself I really enjoyed.

Posted by Deanna Skaggs at 5:15 PM