And Episode III Is Sad

I may have first realized how sad Revenge of the Sith is when I tried watching the prequel trilogy before the original trilogy instead of vice versa--I found that order much more tragic: it makes you realize how Anakin just threw his life away, even if he comes through in the end. 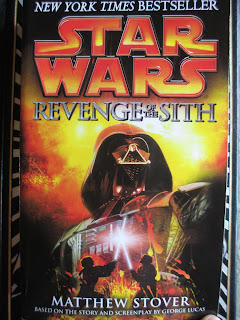 So to spend 450 pages reading of Anakin's transformation into Darth Vader, well, that was sad. In the movie, it's a beautiful sad because there are cool visuals to look at and sweeping music to draw you in; in the book, however, you're left with a more stark and bare expression of Anakin's decision to enter the darkness. There's certainly more detail in the book. When you watch, you basically just see Anakin's fear and anger and his decision to turn to the dark side; when you read, you see every moment and every detail of what that decision, and his journey toward it, means. Particularly compelling is the explanation of how turning to the dark means focusing on the self and opening up the self--Anakin focused on himself so much that he lost the other people he did care about and he opened himself up to so much that he let the darkness overpower what was good about him, although of course that was his intention.

In general, I don't think the writing style of this book was my favorite. There was something almost detached about it at times, something that didn't let me soak into the characters' emotions as much. It was like there were descriptions merely for the sake of descriptions. Though this isn't to say that there weren't some really wonderful lines or moments. The snippets before sections that describe the dark were interesting, as was the way that Palpatine was described. There is such a smoothness to the way that he speaks, that gentle nudging that the darkness in him so suavely gives: Evil, the ultimate politician, eh? (I don't mean to bash politicians in general; I'm only referencing the general idea that politicians know how to smooth talk people to get them to change their minds about something.) And the way that he's often described as a shadow made him downright creepy.

I liked this book in general, but not as much as I thought I would. It took me longer to read and really was a tad depressing in many of its pages (although I suppose that isn't to be avoided). I think after this I will read some of the canon books from last year and this year; later, I might read some of the older books--we'll see. But I can't promise how long it'll be as I don't even own any of the other books right now and I've had a lot of other things stacking up waiting for my attention.