I'm making some progress, eh? Having started with reading the novelizations of the original trilogy (just in time before they release the new books later this year), now I'm on to the prequel trilogy. So here we have Episode I: The Phantom Menace, in the cheap paperbacks of sci-fi and fantasy that I do wish I could avoid. I really think that might be part of the reason why I don't read more in the sci-fi and fantasy genres: I don't like these paperbacks. Anyway. 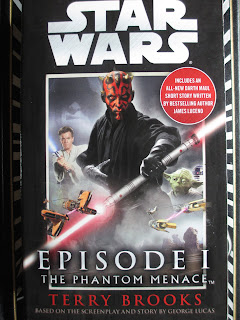 By the time I got to this book from the late 90's, the writing style was much, much improved from the first Star Wars book: it's better and it's more recognizable (both in terms of style and in terms of the references to things, places, and characters in this story's universe). Terry Brooks really did a great job at honing in on what is important from Episode I as far as the story arc of the whole trilogy (or even both trilogies) goes. Though the movie focuses much on Qui-Gon, this book focuses more on Anakin and somewhat also on Obi-Wan, foreshadowing the relationships and events of the future. There are also many more hints about Padme's identity and more development of her friendship with Anakin. Where it's possible to watch the movie without realizing just how "special" Anakin is as a boy, this isn't something you can glance over in the book.

There are many extended or added scenes that help add to what was in the movie: it's all done in just the right amount. There's also a lot of detail in here, describing the characters and the politics and the battles--I found myself less interested in the battles and all. So my favorite scenes were probably on Tatooine (I suppose I do love Tatooine). It's there that so many of the major plots and themes are born, with character relationships beginning that will shape the next five installments of this story. Yes, it's all about Tatooine.

I suppose I didn't love reading this book quite as much as Return of the Jedi, but I enjoyed it for what it does offer. The reading of these books is a very interesting exploration into new territory for me.