Episode II Brings It All In

I tend to think that Episode II: Attack of the Clones is one of the weaker of the six Star Wars movies, though I do also think it has some important moments as far as theme and characterization go. Yet when I came to reading R.A. Salvatore's novelization of the movie, I found it quite good. Somehow this part of the story works out very well as a book, softening and/or explaining some of the rougher edges of the movie. 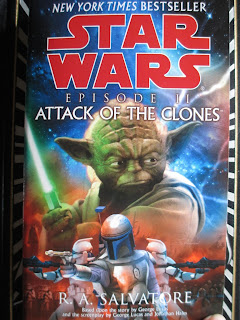 There is really quite a lot of ground to cover in Episode II and there are so many plot lines and two-sided character motives and multiple layers of Darth Sidious's plans going on that it takes a while to understand what all of that is--so until you understand all that, what you're left with in the movie are just random action sequences and the cheesy scenes between Anakin and Padme. Now, I'm not complaining about either the action sequences or the cheesy scenes--I think they both make sense within the context of the story and the characters; they're just harder to accept until you understand everything that's going on. So. It's easier to see and understand everything that's going at this point in the story when you read it in a book versus watch it in a two hour movie--and that allows you to better accept and enjoy each scene. Wow, that was a long-winded statement of mine.

Everything in Attack of the Clones demonstrates something about character or theme and this book expertly adds to each scene or adds in new scenes that help you to see that and help to smooth out transitions between or into scenes. You see a little more into the heads of characters to pick up on nuances you may have missed. You get explanations for things you may have wondered about--like seeing that other characters did notice what was going on between Anakin and Padme or getting more of a look at who Count Dooku was and is. I think a big one is also seeing Padme's perspective during these events: the movie's a little more focused on Anakin, so you sometimes do wonder what she is thinking at certain times or how she transitioned into the choices she makes; this book gave a good look at her character.

I don't know; I guess I just really enjoyed this book and was even a bit surprised by how much I enjoyed it. I even, for the most part, enjoyed the action sequences--the writing is probably to thank for that. My enjoyment must all go to show that, yes, I did make a very good decision to begin reading Star Wars books: I was ready for this next step.

(By the way, Sylvia, my bearded dragon, is also quite the fan of Star Wars--here she is hanging out with Darth Vader. And, yes, he does usually sit on a quilted cushion (he's too tall to fit on the shelves of my bookcase); if you think that is degrading, think of it as his punishment for his life of evil). 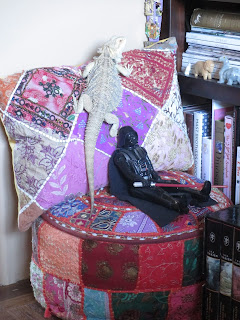 Posted by Deanna Skaggs at 8:30 PM