(I'm going to try something new where, instead of trying to post every other day, I plan on posting on Mondays, Wednesdays, and Fridays. I was starting to miss days too often the other way, so I'm hoping this will become more regular. We'll see.)

I like tea and I like chocolate and so chocolate teas are always interesting to try--yet they are not always my favorite. Usually there are just too many flavors or it all ends up being too herbal or the chocolate flavor disappears underneath everything else. But I still keep wanting to try them all. 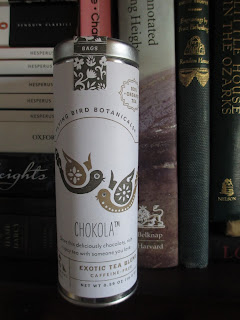 This little tube of tea came from the Desert Botanical Garden's gift shop, and it was positively expensive. Thirteen dollars for six tea bags. I'm used to that price for sixteen to thirty-six tea bags. Granted, it's still probably a bit less than if you went to a cafe and ordered a cup of tea six times--but it's probably the priciest set of tea bags I've come across.

It is organic tea, though, and the cocoa nibs are also fair trade. The tea comes in silken, compostable tea bags, and the tins are made of recycled steel. Flying Bird Botanicals is based out of Washington and I had certainly never heard of them before. They do make some pretty packaging, though, don't they? Nice and neutral colors to balance out the mild frilliness of the birds and flowers. Just a touch of whimsy without looking wacky.

Besides the cocoa nibs, this tea also has roasted chicory root, roasted carob, "spices," and vanilla bean. So more of an infusion than an actual tea. I've had chicory in tea before, but I'm not sure if I've ever had it in a case like this where there are no tea leaves in the mix.

The tea brews into a rich brown color, just slightly reddish. Because I'm sick of trying to take pictures of tea and settling on posting a terrible picture out of obligation, you get no picture of the brewed tea: if it's my blog and I don't want to take a picture of the brewed tea, then I guess I don't have to. Just use your imagination (honestly, it wasn't a very exciting sight, so you're not missing out on much).

It tastes wonderful, warm and fragrant. If this tea were a cookie, it would be a molasses crinkle (which are fairly similar to gingerbread cookies); it has that taste of molasses and ginger even though it has neither molasses nor ginger (well, it might have ginger--it does have undisclosed "spices"). Does it taste like chocolate? Well, maybe a little. I've come to expect that, unless chocolate is the only flavor added, chocolate teas just don't taste that much like chocolate. Oh, yes, and it doesn't taste much like chicory, either, which is a good thing because chicory can get a little strong; I think the chicory is just there to add something to the feel of the flavor rather than to expressly add a chicory flavor.

What's nice about this tea is that it isn't quite a dessert tea--but still could be. It has more the idea of sweetness without actually being sweet, which I find rather nice.

Now, the packaging suggests adding milk and honey. I tried it with some soy (I usually drink almond but happened to have soy in the house, so I added that since the flavor of soy tends to mix into drinks better than that of almond, though I otherwise prefer almond). It mellows out the flavor into something creamier and less rich, something for a cuddly, sleepy-time moment--something less striking.

The next time, I added both soy and honey, and this was too much for me (granted, I may have added just a tad too much honey: there's only one tea I drink with honey and that one's quite strong so it actually needs lots of honey). In this situation, you're primarily tasting the honey with the warmth of whatever spices are in the tea. It's nice, but in general I find that it covers the flavor just a little too much. Perhaps with just honey and no milk might be better. You decide what works best for you. Obviously, I think I'm most partial to drinking it plain, or with a splash of milk.

After all of that, I'm almost done with all six tea bags. Kind of a shame but also kind of a good thing: this is the type of tea that you want to keep special, otherwise you get tired of its flavor. It was fun to try but nothing that I would buy regularly.

Posted by Deanna Skaggs at 8:56 PM