I suppose it doesn't give anything away to say that this book involves the galaxy-wide reveal of a certain secret. The cover of the book, if nothing else, pretty much explains that. And I think everyone who would care has either read the book themselves or at least heard that much about it. 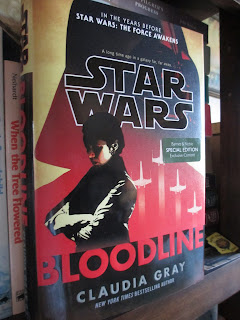 Star Wars: Bloodline by Claudia Gray takes place six years before Episode VII, which was enough to make me quite excited for it: I thought that it must help to explain the answers to some of the questions we've all been theorizing about. In reality, though, the answers that it gives aren't exactly the ones I was seeking--they're more about the political scene. Given how much I enjoyed the drama (as in, the characters and the relationships between characters) of Claudia Gray's Lost Stars last year, a book heavy on galactic politics wasn't exactly what I'd been expecting from Bloodline.

The book centers around Leia and her work in the Senate (it is good to see the work that Leia does); she's trying to work through the Senate's issues while also investigating a new possible threat (the reader is quick to realize, of course, that this threat is the First Order beginning to form) and trying to recover from the galaxy finding out the secret of her parentage. It's interesting--as long as you don't go in expecting to learn more about other questions, like how Ben reacted to all this and at what point he joined with the First Order and why exactly.

For me, the most interesting thing to note from this book was that Ben still, at this point, didn't know (unless he'd found out on his own and hadn't told anyone, which I doubt) who his grandfather was. What? Leia, you didn't tell him? No wonder he flipped. You can't just try and hide something like that, you have to tell it to them from when they're young so that they take it as a part of history, a fact rather than a tragedy. Maybe it would've been easier for him to make peace with the truth if he had always known about it, if his family had always told him what it did/didn't mean for his own life. So he's about 24 when he finds out. And apparently, he hadn't been flirting with the Dark Side or anything before this point (Leia's brief mentions of her son contain no concern about this). So it may have been a big and sudden explosion.

Let me (halfway) get back to the content of the book. It might just be me, but I felt like I could see many aspects of Episode VII in there, even though we were following a fairly unrelated plot (the politics of it are related, of course). Namely, Leia's relationship with Ransolm Casterfo. He is someone that she develops a friendship with, someone who betrays her (in his attempt to tell the truth, or otherwise do what he thinks is right at the moment), someone who later tries to do the right thing by supporting her, someone who must face the consequences of his actions in the end, and someone that she decides to forgive. Sound like Ben to anyone else? Leia's son, who betrays her by joining the First Order, who might try to right his wrongs, who will face consequences even if he does, and who Leia will always be able to forgive because she loves him. I kind of wonder if Ransolm wasn't a subtle bit of foreshadowing. It would make sense because he, too, doesn't think at first that he is doing anything wrong--he thinks his aims are good and they basically are; he just goes about things in the wrong way sometimes and when he finally realizes it, he can't escape. "It's too late."

Yes, I know, I hardly stayed on topic, but that's why I don't consider my posts on books reviews. (Book reviews I usually consider boring, anyway; book reactions are better.) I did enjoy Bloodline, just not as much as I'd hoped I would. And as far as it not answering as many questions as I'd hoped, well, that's probably a good thing: the less we know, the longer we'll be able to keep having fun speculating.