The End of the Hobbit Books

That's right, this is the sixth and last book in the Hobbit: Chronicles series by Weta (this one is subtitled The Battle of the Five Armies: The Art of War)It's been a long journey and I'd be lying if I didn't say I'm kind of glad it's over: they're very interesting books but it's also quite a lot of content to go through and it does get a little exhausting. (I admit that I also started reading it later than I otherwise would have because I was too busy thinking about Star Wars to get back into The Hobbit quite yet.)

Add to that the fact that much of this book (I think more than with the others, though I could be mistaken) involved white text printed on a black background. That may seem like a petty detail to you, but white text is much harder on my eyes--especially when reading at night by lamps and such, which is usually how I've been reading books lately. So that's one of the reasons why this book took me so long to get through. I would pick it up, excited to read it, and then set it down two pages later because my eyes just couldn't take it. So. Enough of that. 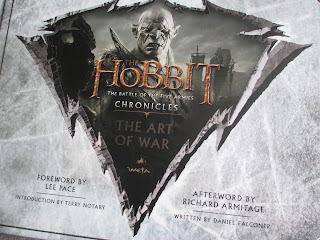 At 250 pages full of images and commentary, well, it was also a good thing to take my time just to be able to absorb it all. We had some of the usual things in here, like concept art of costumes and armor. But there was also a lot that was a little new to hear about in such detail. Terry Notary, Movement Coach on the film, gave lots of commentary both about who different characters/species moved and about choreographing certain scenes. And given that the last movie was basically just the battle, there was much about the layout of the battle, the geography of it, and all that. Kind of amazing how much they had to block out and plan. The fold-out battle map at the back of the book was helpful in visualizing both what they're talking about and what's going on in the movie.

I guess that's about it. This last book is a bit of a monster to read through but just as informative and interesting as the rest. (Side note: there were a few typos in here, which seemed like a bit much for a book like this, even though typos are pretty normal for any first edition book.) It completes my collection, and I don't know of any other movie books that are so detailed as this set. (Just as I don't know of any movie features that are as comprehensive and detailed as those for the extended editions of TLOTR.)

Oh, yes, and one last mention for the cover. You can't tell without having it physically in front of you, but the cover is pretty amazing. It has a layer in it that looks like ice, with Azog breaking through the ice just as he does in the film; it's really quite a cool effect, even though it feels odd and terrifying to be reading a book with Agog on the cover.

Posted by Deanna Skaggs at 7:19 PM

Labels: Chronicles, The Art of War, The Battle of the Five Armies, The Hobbit