Only on week one of my new posting schedule and already I'm a day late--but I was expecting to be home all day yesterday and then I wasn't, so I haven't gotten around to typing up my notes until tonight.

I feel like I should have known. When a product is too focused on what it doesn't have, well, there is less focus on tending carefully to what it does have. But let me back up and move through my initial impressions through to the final statement. 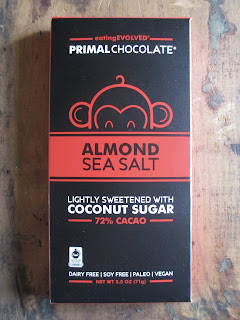 This bar of Primal Chocolate by eatingEVOLVED (the lowercase and then caps letters should have been a clue, too) out of New York caught my eye because it is sweetened with coconut sugar. Now, when I reviewed the honey-sweetened chocolate from Untamed Confections (you can read that review here), I mentioned that I avoid chocolate sweetened with stevia because, quite simply, I think that's weird. Honey is good, though. And I suppose coconut sugar is alright with me, too, because I bought this chocolate; coconut is a good food, though of course I would hope that it doesn't add much flavor because I'm not too fond of the taste of coconut (which I also just mentioned when reviewing Alter Eco's truffles that are made with coconut oil--you can read that review here).

The packaging has a good look. It has that combination of minimalism with a dash of silliness to keep it from being too sleek and serious (and therefore feeling unapproachable); this simply implies that it's quality. And the monkey, I suppose, is because of the whole evolving from monkeys thing--though if monkeys are in the past, then how can they be a symbol for a "more evolved" food? 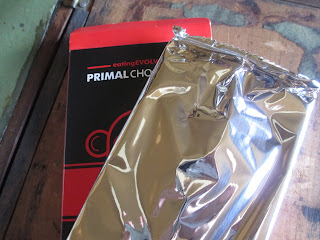 The store I was at only had two of their bars, this one and a 100% cacao. While a 100% is great when done well, it's also very hard to do well and when it isn't good, it just feels like a waste and has no use except for going into recipes. So I chose the 72% instead, not realizing that this one is flavored (there is also a non-flavored 72%; it just wasn't available at this store). I noticed later on when looking at the chocolate in my cart and decided that it would be better to try a flavored bar than a 100%, anyway: just because they can't pull off a 100% doesn't mean the rest of their chocolate can't be good. (Do I sound very cynical here?)

On the back of the card box is the statement "Chocolate: it's food, not candy." While I agree that not all chocolate is candy, I'm not sure how I feel about calling it a food. I prefer for it to be a luxury item, something akin to dessert. But if the words just mean to say that the chocolate is good quality, well, then, I'm all on board for that. And the facts (some of them, that is) imply quality. Organic ingredients and fair trade cocoa. All we have in here is the chocolate (with some extra cocoa butter), coconut sugar, almonds, and Himalayan sea salt. 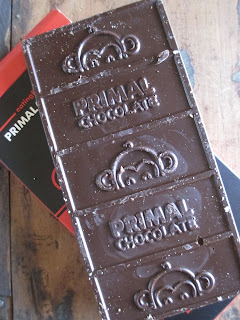 While the design of the bar continues the look of the card box, the surface is fairly scuffed, as if it hadn't been protected by the box at all. I'm used to chocolate looking old by the time it gets to me, but I'm not sure what happened here. Anyways, if you flip the bar over, you find a nicer view: slices of pale almonds scattered around the dark surface. 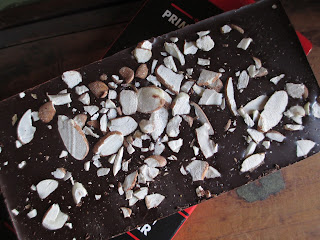 First taste: it has a bit of a bitter sting to it that reminds me of Bonnat Voiron's chocolate. So it needs that dash of salt to help take the edge away. And this really is a great use of salt in chocolate (which is an overused, often unsatisfactory culinary trend): the Himalayan salt has a lighter taste that fits in better. But that's about all the positivity that I have left to say. I mean, the almonds are sliced nicely, thin enough to give just the right type of crunch.

If this chocolate didn't have the salt and the almonds, however, I doubt I would want to eat it. It's bitter and not in the good sense, the type of bitter that just adds flavor and edge. This is the type of bitter that stings and draws your taste buds into hiding, the kind that feels more like rough texture and therefore disguises the richness and complexity of the chocolate. And, yes, I tried the chocolate at different times and still didn't care for it. Granted, this could just be my preferences: I didn't like the two Bonnat Voiron bars I had several years ago but it seems that other people do like that company. So perhaps this chocolate will appeal to some palates.

Is the difference the sugar, which I have neglected to talk about? It's possible, though I would find that unlikely considering that I do eat (and enjoy) pretty high cocoa content from time to time. Perhaps the coconut adds a bit of a bitter tinge, so it isn't just bitterness from the chocolate that I'm detecting? This is more possible, considering that coconut water usually tastes somewhat bitter to me, too (is it like that for everyone? I know I sometimes have a weird palate). So it is entirely possible that this chocolate will taste completely different to you than it does to me. But I can't exactly recommend it and I won't be buying this brand anymore. To me, there are much better-tasting chocolates on the market and I don't mind if they're sweetened with regular sugar, either.
Posted by Deanna Skaggs at 9:07 PM