Where Clouds Are Formed

How can I resist that title? It's a beautiful title for what is also a beautiful book: a poetic cover, purple textured paper on the outer pages, light and curling swirls like clouds to mark the different sections. Oh, yes, and about seventy-five pages of poetry. 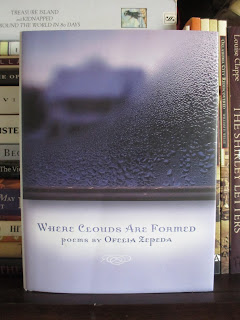 Where Clouds Are Formed is a University of Tucson Press publication and Ofelia Zepeda is an editor with the publication and a professor at the university itself. She's also a member of the Tohono O'odham Nation and has done work in preserving and promoting Native American language and literature, including putting together the first grammar textbook of O'odham. Her "About the Author" page is a tad longer than usual, with reason--and for the same reason that I had to mention a little bit about her, even though I usually don't say much (if anything) about authors in these short posts. She just seems like a great person, very intelligent and very wise in what she spends her time on. So if you would want to read poetry from anyone or feel like anyone is entitled to be writing poetry (entitled is a weird word to use in talking about art--but I suppose I specifically mean the type of poetry she is writing), it's her.

Obviously I picked this book up because of the title. And then the first line of "Dirt" drew me in: "Lately I've been craving dirt" (21). Yes. I can't perhaps say that I have achieved this fullness of life, but I know what it is to need the connection to the earth. When I water the garden, I like to watch the dirt change color and I like to see the plants growing almost imperceptibly bigger each day. When I plant new things, I like to feel the dirt on my hands, the seeds in my palm. Simply to read the poems that talk about this type of connection is to gain something special.

But what was intriguing about Zepeda's poetry is her combination of nature and traditional viewpoints with the sense of the modern world. I don't want to simply repeat what the inside of the book jacket says, but this really is the core of her writing in this collection. It's a flawless combination that I can't think of finding anywhere else. Sometimes the modern world appears jarring when set beside nature; in this case it doesn't. Just as a person can learn to take part in both sides, the past and the present, Zepeda brings the two together seamlessly. For instance, in "Dirt" she moves from talking about soil in the garden to the dirt that came out of the adobe walls in the house when they worked on electrical wiring and so on; they're all aspects of life that aren't necessarily always grouped together but in fact do have a connection.

So while I enjoyed the familiar imagery of mesquite trees and summer storms and such, what kept my attention was the perspective with which these poems speak. Zepeda's tone is frank, direct, and simple. Granted, she spends more time describing Native American ceremonies and prayers than I am interested in, but these are her culture. And she has such a wonderful perspective on gratefulness, seasons, and interconnectivity that I really could be applying more to my life. I've been complaining so much lately about the wind, for instance, when I should really be stopping and thinking about what it means for it to be windy for so long; I shouldn't look at anything as just something to complain about. That's petty and unhelpful and, well, not in line with how I want to live my life and how I want to view the world.

I finished this book quickly; it's fairly short. I may have connected more with Clara Emily Guion Aguirre's poetry recently, but I still gained something from Ofelia Zepeda's writing. I want to keep on reading more things like this.
Posted by Deanna Skaggs at 9:06 AM