A View of the Grand Canyon

As I was flipping through this thin, hardcover book about the Grand Canyon at an antique store, I noticed there were Bible quotes next to many of the pictures. That took me by surprise. I looked over at the cover then and saw the title: Grand Canyon: A Different View. Ah, that explains it. Naturally, then, I bought the book. 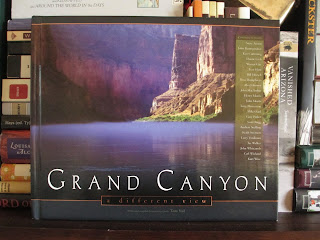 At about a hundred pages, this isn't exactly a long book, but it has more than just quotes next to pictures. It's divided into different sections that each have a couple of pages of content from different writers (it's put together by Tom Vail). Most of them have doctorates and a few have masters; only one has neither (he's a speaker and author). I'm not certain if the text is mainly excerpts from their works or if this is content written specifically for this book. The distinction makes little difference to me, though.

I said that this isn't a long book. So I wasn't expecting it to get very in depth in science and such. Because I wasn't expecting too much depth, though, I found that it did go through a lot of important notes. Now, there are certainly other books on the subject if you want more. This book provides either an introduction or a brief look. I was just happy to find this kind of perspective.

Basically it's about this: when you look at the Grand Canyon scientifically, you're either looking at it from an evolutionist or a creationist point of view. And then you're either looking at it with the idea that the Bible is a literal history or not. Taking it as literal means that it's also a history, so therefore the earth is only thousands of years old. The Grand Canyon, then, was presumably formed in the aftermath of the Flood.

One of the people in here describes how he used to tell people about the layers in the canyon forming over millions of years but that never made as much sense to him as seeing the canyon as the result of a global flood. I hadn't realized that the Grand Canyon is one of the big pieces of evidence creationist scientists use to explain why a young Earth and a global Flood both make sense. One of the big points that stood out to me is the "knife edge" between different layers: if there had really been so many years in between the layers, then there should have been erosion there instead of such a straight edge. And so forth.

In addition to scientific observations about the rocks, fossils, and animals, this book also brings us to an interesting point that I hadn't really considered in terms of the Grand Canyon before. We always look at the Grand Canyon and say, wow, how beautiful and awesome it is, what a beautiful creation. But it wasn't "created" in the sense that it was part of the original Earth. It came about because of the Flood, which came about because of God's judgment of Man. It's beautiful--but it's also serious.

Once you've read this book through, it's like a coffee table book, something you can flip through to look at different sections (the photography is great, by the way, and offers more than just the usual canyon views). It's also a reminder to not bend and to look for your own evidence and explanations.

Posted by Deanna Skaggs at 3:24 PM