Click here to read my post on the first book, The 100. I've decided to combine my comments for the next two books in the series into one post, though I wrote them at separate times.

First I watched The 100 the TV series (the three seasons that are out so far, that is). Then I started reading the books. The first one was alright, since I went in knowing that it would be very different from the show. But I mistakenly thought that it was building up to more complexity that I would see in the next installment, Day 21. So now I've finished this second book disappointed that it stayed short and simple. (I'm also keeping my comments short and simple.) 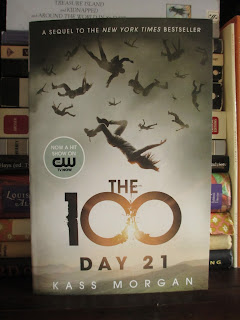 Maybe the shock comes because the TV show can be for both teen and adult audiences, while the books seem to be written for fourteen or fifteen year olds. The structure is very simple (more like the structure I would expect from a book for eleven or twelve year olds, in fact). While I don't necessarily mind simple structure (one of my favorite books ever, Skylark, is written for eight year olds and I read it for the first time only a couple of years ago), I mind the simplicity in this case because I was used to the complexity of the show. That is, the show keeps the focus on point but also develops complexity of characters and culture.

There are some cultural developments in the books that don't exist in the show--the class system, for instance. And the orphans. But everything about the Grounders (called Earthborns instead) is not just different but also simplified. Simplified to the point that the Earthborns made me really miss the Grounders--and I don't even get great themes to make up for the loss of details. (Because, you know, if the themes are still great, I can go without the details.)

The problem, for me, was that this book feel like it was repeating itself (is there any distinction between Wells, Bellamy, and Luke?) and taking the whole space of a book to not go very far. I read it quickly and wanted to keep reading it, but in a more passive way. I guess what's bothering me is that I wanted to really like these books and, well, perhaps they're just not written for me. I can enjoy them while I'm reading but they don't stay in my mind afterward. We'll see if that changes for the next one.

I would have thought that by the time I got to this book, where I knew that the plot was going to be different from the show because the events weren't even slightly related anymore, I would be enjoying it more because everything was new and the suspense and all could be real.

Such, however, was not the case. 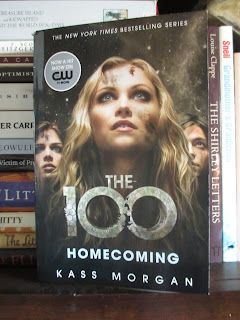 I enjoyed this book least out of the three. I read it the slowest and I felt completely disconnected to it as I read. Everything I read fell flat, leading me to the final conclusion that this book series is not for me. With that said, I don't feel like it's either fair or necessary for me to try and dissect what I didn't like. If I had read this series in one go before starting to write up my posts, I wouldn't have posted at all. So I'm just going to end it there and recommend that adults who don't read exclusively YA books don't pick these up.
Posted by Deanna Skaggs at 12:53 PM