Click here to read my initial thoughts about the TV show version of The 100.

Usually when I start in on a story in one medium, I have to finish it in that medium before seeking it out in other forms. For example, if I watched one movie, I have to watch all the movies before reading any of the books, or vice versa.

So while I didn't even know if I would ever feel inclined to read Kass Morgan's The 100, I did figure that I would at least wait until the show ended. After all, I felt invested in certain things about the show, and I knew that the show was only loosely based on the books--so there would be a risk in reading those books only to have them take apart the things that I did like.

The thing is, as time passed, I wanted more of the world of The 100. So here are my thoughts on the first book in the series (there are three out right now, with a new one coming in December--I have no idea if there are more planned for after that or not). 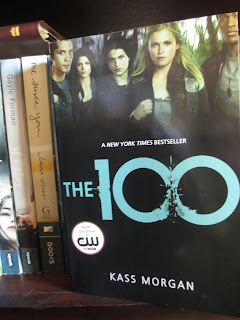 It is true that this book is very different from the show. While the show follows characters of different ages and a variety of themes and plots, the book is much more YA. There are four narrators; the oldest is twenty and the rest are in their teens. So you always have the youth perspective on events. In some ways, the book characters feel more innocent than their TV counterparts--and not just because the whole Lord of the Flies feel is almost completely gone (for this first book at least).

Though you still have certain main characters like Clarke, Bellamy, and Octavia, others are different. There are missing characters (Finn is on the book cover even though Finn isn't even in the book) and different characters (Glass is interesting) and some characters that basically serve the purpose of characters in the show. So you definitely can't walk in expecting everything and everyone to be the same (Bellamy, for instance, is very different from how he appears at a few key points in the show). But maybe this is a good thing: with the book and the show being so different, it's easier to keep them separated in my head and just enjoy them as individual stories.

I am disappointed about one thing. As I watched the show and collected all of those great quotes, I wondered if those came out of the books. I thought that if the writing was like that, then surely it was good writing. But I don't think I recognized a single quote, even from the less significant ones. The writing is fine, but it wasn't at that elevated level that I was kind of hoping for.

The themes are a little different, too, as is the approach to right and wrong and politics and order and all of that. I called these teens more innocent than the ones in the show, and I think that carries through into the concept of responsibility. The characters in the show, no matter their age, struggle with the weight of their actions. The book characters have a little less of that weight--at least, they only have it in terms of personal relationships. Doing this hurt that person I cared about, that sort of thing, rather than doing this was wrong because the repercussions were this and this. But I am still at the beginning of the story, so it could be that their experiences widen as time goes on (which I know it will because a big part of the story only just started on the last page).

I suppose that's all I have to say for now. I enjoyed this book in a casual sort of way, and I'll report back when I finish the next one.