Sometimes the word "poetry" does not fall off the tongue well. To say that I like reading poetry sounds odd, like something I wouldn't want to admit--or like a phrase that doesn't quite convey what I might mean if I were to say that. The thing is, poetry is so personal, more so than prose. There are so many forms and approaches that poetry can take, so tastes in poetry vary just as much as (if not more than) tastes in novels.

I'm settling into what kind of poetry I like, and so I am having less difficulty in saying the word "poetry." In college, I favored the Romantics (I still love to pick up my Complete Works of John Keats when I need to read his words), and now I favor the poetry of the Southwest. In April I read Clara Emily Guión Aguirre's The Poplar Tree and in May I read Ofelia Zepeda's Where Clouds Are Formed and now I have just finished Alice Corbin's Red Earth. I picked this one up at the museum shop at the Palace of the Governor's in Santa Fe. 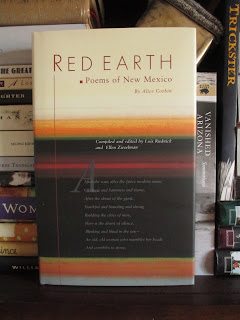 What is, first thing, interesting to note when considering these three poetry collections in the same sentence is the difference in the writer's backgrounds. Aguirre and Zepeda were/are both from the Southwest. Corbin moved to New Mexico in 1916 as an adult for her health--and then quite fell in love with the region and its peoples. Though she became an advocate for preserving and encouraging the local arts, she was a "white" newcomer. This makes her approach to her poems significantly different from Aguirre's and Zepeda's.

Because of all of this background, you will definitely want to read Lois Rudnick's Introduction to this reprint of Red Earth. She talks about Alice's life and her influence on literature and on Santa Fe. She also gives some interpretation on the poetry and discussion of context and certain "complications" that arise when an outsider attempts to represent a culture. Perhaps I shouldn't say outsider, but that's the simple way of putting it: Alice Corbin seemed to really appreciate the lives and cultures of the people she met in Santa Fe. From them, she gained a new perspective and a new way of looking at life.

She conveys these discoveries within this poetry collection. The tone, I would say, isn't quite as soft as Aguirre's, nor as sacred as Zepeda's. But these poems do also contain appreciation and gratefulness for what the earth and life offer. As Rudnick points out, there are various styles in the different poems. Because Corbin had spent so much time in modern literature before moving to the Southwest, she's able to bring a certain style to the familiar places and imagery that you don't usually come across in this context. So she definitely offers something a little different from what I had grown used to finding in Southwestern poetry.

That's about all I have to say for now. Lois Rudnick did such a wonderful job of highlighting the important pieces or lines in this book that I feel like I don't have much to add. I'll just say that my appreciation for this book also grew as I read about Alice's life and opinions. She had a great influence on the art scene and on the preservation of local New Mexican culture. New Mexico is such an inspiring place because of the land but also because there is some preservation and continuation of what people created there and from there. The history of New Mexico is . . . the history of life. The land is life, in all of its circles.
Posted by Deanna Skaggs at 11:49 AM