Here's my current plan: since I hadn't read any Star Wars books before a couple of years ago, I'm now trying to read all the new ones that come out--that is, all the ones that come out right now while they're releasing new movies (you know, for plot teasers and the like). Eventually, I'll probably have to just pick and choose which ones sound like I'd like them. But for now, I'm reading all of the new ones--mostly. There are so many children's books that, while I do like to read the big ones (the junior novelization was great and I loved Rey's Survival Guide, for instance), I just don't see the point in getting them all and probably couldn't, anyway. 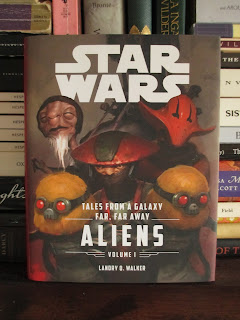 So I was going to let Star Wars: Tales from a Galaxy Far, Far Away, Vol. 1: Aliens by Landry Q. Walker pass me by (this book, as you probably know, focuses on some of the characters you see in the background of The Force Awakens). Then it was there at the bookstore sort of looking at me and so I thought it might be a fun little read: after all, I sometimes end up enjoying the children's books more than the adult ones. It depends on the story, not the age group.

Which brings me to an interesting note about this book. What age group is it, exactly? This book is about 354 pages, but it's made up of six short novellas with chapters. And I'd estimate that there are about ten words per page (maybe eleven)(you do know I'm exaggerating, right?). So it's a very quick read for adults and doable length for younger readers, too. Given that there are a few smatterings of technical or sci-fi wording thrown in, I probably wouldn't put the age group younger than ten. But why am I even going on about this? Well, because content is my concern.

I don't mean to be overly delicate here. But one novella has a chopped up, murdered body in a freezer and another has descriptions basically of torture. If this book were a movie, it wouldn't be PG. So. There's that. Because I'm me, I have to say that I would consider the age group more like twelve or up, in which case I consider the reading level too low (many of the chapters are only one or two pages long). But maybe this is just intended to be "short story style" rather than low reading level--but that seems odd to me because often short stories are forty pages long without any chapter breaks at all.

That's enough of that now.

As far as plot and writing go, this was an entertaining read, despite all of my random comments and despite my initial disinterest. The first story, "High Noon on Jakku," was easily the simplest and least interesting. "A Recipe for Death" is a Star Wars edition of Master Chef, plus a murder mystery. "All Creatures Great and Small" had more whimsy and imagination for a different twist. "The Face of Evil" was creepy and Frankenstein-esque with a good helping of The Twilight Zone. And "The Crimson Corsair and the Lost Treasure of Count Dooku" was an adventure story with an awesome volcanic desert setting.

Dark and entertaining short stories. That's what I would call these. So if you hadn't read the book because, like me, you thought it would be too targeted toward children, don't let that stop you. They may have simplicity, but they also have characters and settings that will stick in your memory.

Posted by Deanna Skaggs at 7:31 PM