'Tis that time again, the time in which I wander around to the theatre and the ballet and the opera. The first of the season was also part of Arizona Opera's new McDougall RED series. With these, they're going for shows with a slightly different tone or style and putting them in the smaller Herberger Theatre rather than the grand Symphony Hall. 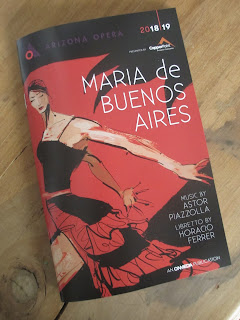 Even that change means quite a big. While Symphony Hall is so big that you can buy last minute tickets for the opera no problem, Herberger is small enough that seats were getting filled up much sooner. As per usual, I took the very back balcony row, even though this was my first time at Herberger and I wasn't sure how a seat in that row would be. Turns out, though, that this seat was perfectly great. Though the balcony is greatly tiered, it wasn't to the point that you felt like you were going to fall over (like at a big arena), simply that it was tiered so that you could be closer to the stage and with a clearer view than if there were little or no tiering. The small size of the theatre was more comparable to watching a play at the Mesa Arts Center than to watching an elaborate opera or ballet at Symphony Hall.

Indeed, the show itself, Maria de Buenos Aires, was almost more like watching a play than an opera. Celeste Lanuza as El Duende made me think of something like spoken word in the way that she wasn't quite singing but not quite just speaking, either. And while opera tends to be about big shapes and movements that you can see far away (with the main emphasis on sound rather than sight), this show made a little more of movement. It's a tango opera, so of course there was dancing, but also other types of movement that went along to help tell the story.

And the story? A story of sorrow, the story of a woman who is born from the toying meddling of El Duende to a life of pain. Yet also the story of a woman who feels deeply and, led by a song in her soul, pictures great things. Is it a story of triumph over darkness? No, not really. Triumph hardly seems to describe what the ending felt like: it felt more like taking a breath after struggling to hold it beneath water for a very long time.

I don't know. I think this opera was more about the feeling of each moment than a particular theme. As you'd expect from a tango opera, it is often deeply moving and sensual and striking and bold and did I mention moving?

The audience knew going in to expect something different. You could get the vibe in the first few scenes that everyone was kind of trying to get their bearings and figure out what type of a show this was, but by the time Maria (portrayed by Catalina Cuervo) sang "Yo Soy Maria," we were all enthralled in this weird web of red darkness. I don't have the words to describe Catalina Cuervo singing as Maria. She has been in this role over 50 times, and so it would seem that she has entirely embodied the passion and sorrow of this character. She took hold of the whole audience. And when Luis Alejandro Orozco joined her as the Payador, it was . . . like this beautiful passion of love that they were singing.

While an opera is usually close to three hours, this was only an hour and a half (which is kind of nice for a modern audience because you can just focus in on enjoying rather than getting either antsy or sleepy before the end). Yet it felt like it covered so much that it couldn't have been so short as that. Fascinating and striking. That is what Maria de Buenos Aires was.
Posted by Deanna Skaggs at 3:10 PM