Of course everyone who loves the character of Thrawn was excited about the sequel book Thrawn: Alliances that came out late this summer. I, however, was excited when I found out late in that the book was going to feature Padme--and Padme/Anakin. (Who else is super excited that Claudia Gray has a book about Padme coming out next year? We need more Padme. And then how about a book about Shmi Skywalker? No? Anyone? Just me on that one?) 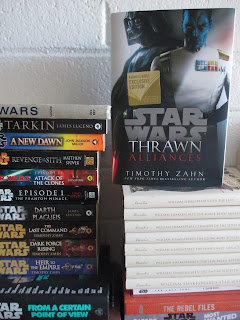 One half of the story takes place in the "present," which is during the time between Episodes III and IV. The other half takes place in the past, which is the Clone Wars era. There are interesting aspects to the present storyline: you get to see dynamics between Vader and Thrawn and all of that. Mainly, though, it was the past that lured me in.

I love to see that time. I like to see Padme at her best, as the double figure of ambassador and heroine. And I like to see Padme and Anakin's relationship, specifically the ways in which they lived that double life. They're steadfastly connected and they do work together publicly but they're also trying to pretend that they're just casual acquaintances.

And then there is also the Vader/Anakin connection. That's where the present storyline was great to watch, as well: you saw the shadow of Anakin over Vader. There is this sense of the past that he suppresses and tries to pretend doesn't exist--but it's still there.

Hmm. Obi-Wan said that Vader killed Anakin and that when Vader came into being Anakin died. But did he? Can you truly kill a good person? A good person can let destruction reign, yes. But does goodness die so easily?

So, anyways, while I didn't overly care about what the plot was or wasn't (it had an element of mystery/curiosity to it, but I was never curious to discover what was going on), I did enjoy what this book offered as far as characterization, which is of course what I'm after from Star Wars in the end, anyways.

(And yes, Disneyland fans, including me, will love the inclusion of Black Spire Outpost, as well.)
Posted by Deanna Skaggs at 5:43 PM