Now for something even more different than just a little different from the norm. This is not only stretching my chocolate standards but also stretching what exactly we mean by chocolate. Which I suppose is fine given that I've also talked about chocolate candles and lip balm and notebooks. Today's unusual item is the Choc-o-saurus Freeze-Dried Chocolate Ice Cream with Chocolate Chips from Astronaut Foods. Dinosaurs and chocolate, I mean, I couldn't resist. 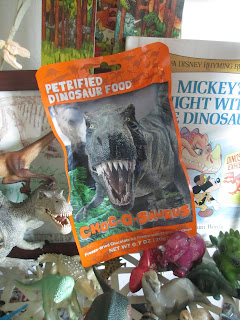 I've never had freeze-dried anything, except for things like strawberries that don't entirely count because freeze-drying them is just a specific way of drying them versus freeze-drying an entire processed food. So this was an entirely new thing to try. Inside the pouch is another pouch of paper. The packaging explains that there are slits in the paper "to facilitate processing" and that the product will naturally be slightly broken. Wasn't too broken, though. A bit but not much. 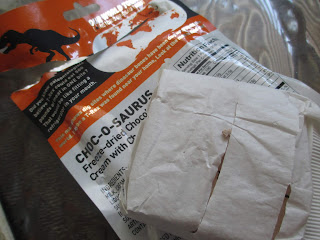 What took me by surprise (although I suppose it shouldn't have) was how much it smells like chocolate ice cream. Specifically partly melted chocolate ice cream. It looks like ice cream, too, which also shouldn't be surprising given that, well, it is ice cream, just dried. The drying process does give it kind of that honeycomb look with the slight air bubbles (by honeycomb I of course mean the toffee-like honeycomb, not the honeycomb made by bees). It feels light and weightless in the hand. 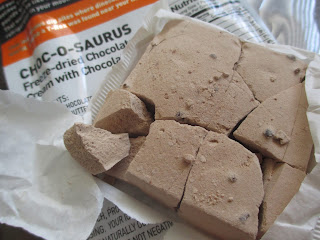 There are two ways to eat such a food. You can leave it in your mouth to melt. In this way, it will legitimately become like ice cream except that it isn't cold and it almost feels a little stickier somehow. It's strange. Or you can chew it a little. With this method, it will somewhat at first like a malt ball except that it's softer and melts more and then does also become much like ice cream. It's a very creamy, chocolatey type of ice cream. I at first forgot about the whole chocolate chips thing, maybe because I had small pieces on the outside that didn't have any chips or maybe because they're small enough chips that they kind of just blend into the whole effect. When I did notice them on their own, well, they were nice as chocolate chips but in truth they are terribly cheap chocolate. Which is entirely to be expected, so that's all I'll say on that.

So this is just one of those products that's very weird but also kind of cool and fun. It's a novelty product and a gift shop product. It isn't something you'd buy all the time. But I would recommend getting it once if you come across it. Because chocolate and dinosaurs--why not?
Posted by Deanna Skaggs at 8:53 AM