What an interesting journey into the world of opera this has been. It began with Don Giovanni at Santa Fe Opera and then I started in on Arizona Opera two years ago with Madama Butterfly, which has remained one of my favorites. That piece broke my heart. So two years later, I found myself watching another story of love and tragedy, Verdi's La Traviata.

It's funny. The difference in story between the two was likely quite fitting a difference for me two years ago and today. So siting watching La Traviata this weekend was like swimming in a strange blur where everything in me was blending with everything in the opera. I thought it was just me until I read all of the material in the program that comments on Verdi's way of reaching the audience with relatable, real life themes. I felt it. 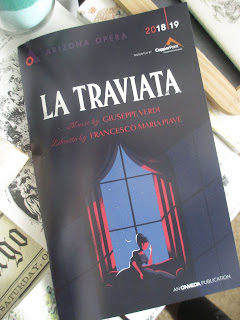 In my observations over the past two years, I have observed that I like Puccini much and Rossini not as much. So I've definitely started in on what style of music I prefer. Verdi was different from both, though I would say more like Puccini than like Rossini. I kept on noticing (again, with my unmusical perspective) how the singing would come to a climax that was then matched by the orchestra. It was very theatrical, the way that the two matched like that. Emotion plus, well, louder volume.

I always like to say that the sets and costumes were pretty--this time I couldn't even pay much attention to them. I was just reading the lyrics and listening to the music . . . and yet I can't even remember much of the music now. (Though I think I will maybe look up a recorded version to listen to again.) Yet still it caught me up in that strange blur of emotion. Sara Gartland as Violetta led it all; I feel like I was watching an ode to her life and her final discovery of love and her acceptance of that love at whatever cost, even the cost of pain and heartbreak. David Blalock as Alfredo did also bring in some sweet, sweet tones that helped to create that feeling of love.

I was expecting more tragedy to the story, I admit. Maybe because I was expecting more, this didn't feel "that bad," even though of course in real life it would be. I think this is because the main effect, for me, was Violetta's choice to take this love that she has with Alfredo at whatever cost. So everything else kind of fades away because their love was the point and even any tragedy that accompanied it somehow only made it sweeter. But I guess that perspective is the perspective of a literature student who finds beauty in the painful things, too.

So very lovely, definitely one of my favorites.
Posted by Deanna Skaggs at 4:46 PM